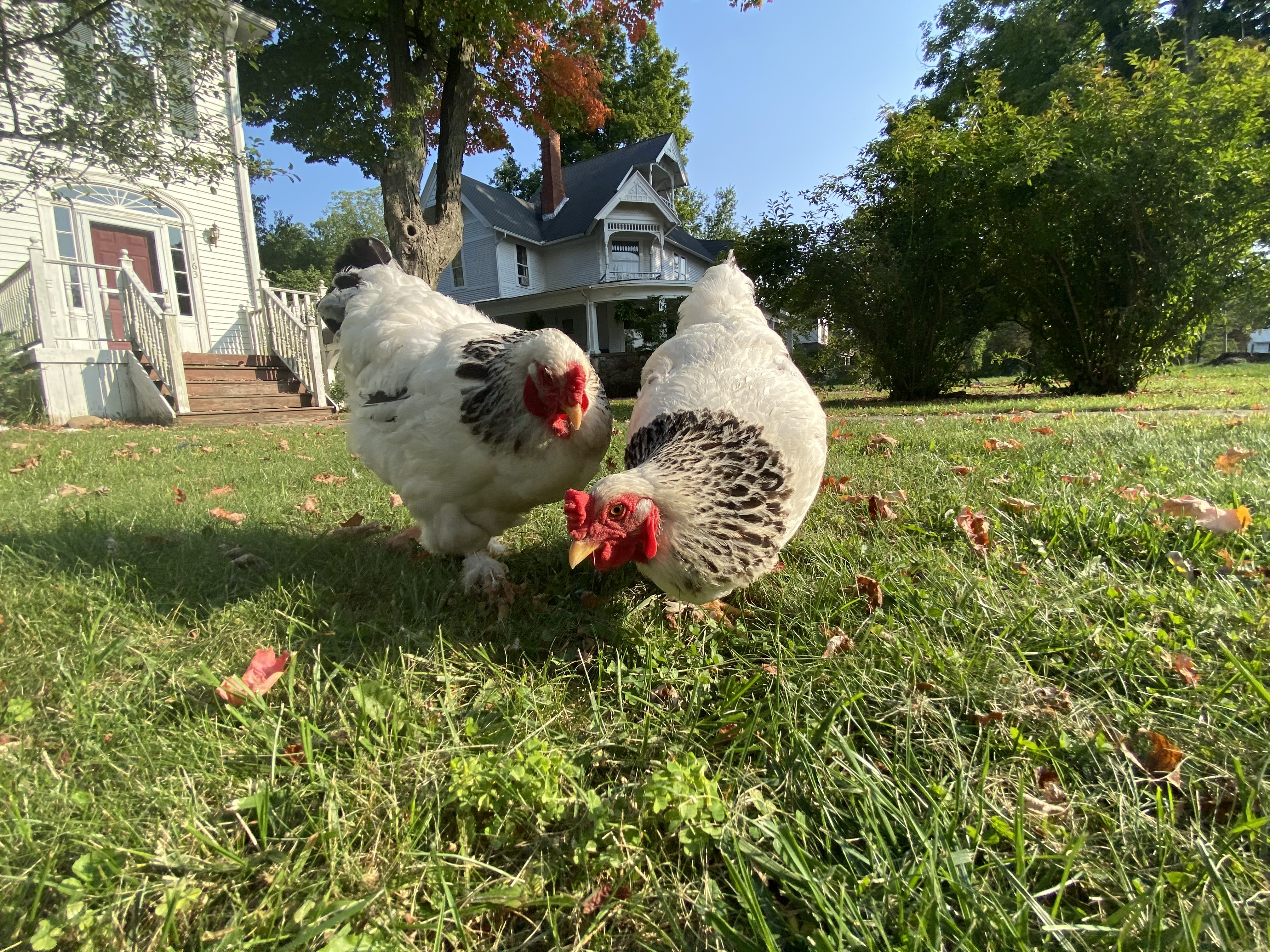 It’s a normal weekday on Oak Street. Stu­dents rush up the hill for class. Cars trundle along the road. A small pack of hens roam the side­walks.

Now a staple sight on Oak Street, the hens, which belong to senior Morgan Mor­rison, are emblematic of a growing trend on campus towards agrar­i­anism. Encouraged by the low cost, fresh tastes, and hands-on expe­rience of farming, some Hillsdale stu­dents are slowly turning their corner of campus into Jefferson’s agrarian ideal.

Mor­rison, along with his housemate Josh Pautz ’20, bought three hens last April from a live­stock auction at the Hillsdale Fair­grounds.

“Orig­i­nally, I wanted to buy a chicken to butcher and eat,” said Mor­rison. “I thought that would impress my girl­friend a lot. And it probably would have, but I realized that, number one, I spent too much money on the chickens to kill them, and number two, they were too pretty and sweet to kill”.

Since his change of heart, Mor­rison has spent his mornings tending to his chickens — cleaning their coup, refilling their water, and “staring at them in admi­ration.” To keep his hens happy and healthy, Mor­rison allows them to free-range all day and return to the coup — which he and Pautz built — at night. Morrison’s ded­i­cation to his chickens hasn’t gone unno­ticed. According to Mor­rison, his house-mate, Karl Weisen­burger, has taken to saying, “Get yourself a wife who looks at you like Morgan looks at his chickens.”

Although the hens only lay about a dozen eggs per week, Mor­rison said, “they’re the best eggs you’ll ever taste; the yolk is deep orange and tastes like butter.”

“I think Hillsdale encourages cre­ating and cul­ti­vating things,” said Liana Guidone, a senior who began brewing her own kom­bucha over the summer. “Growing your own garden, or evening doing some­thing a bit easier like brewing kom­bucha, takes a lot of ded­i­cation and respon­si­bility, and Hillsdale def­i­nitely encourages those things.”

Kom­bucha, a fer­mented, slightly effer­vescent tea drink, is made from a sym­biotic culture of bac­teria and yeast, or SCOBY. According to Guidone, the brewing process is fairly simple. To make a half gallon, boil six to seven cups of dis­tilled water with four tea bags and half a cup of sugar. Then, let that cool before adding one cup of starter which is already brewed kom­bucha and SCOBY. The length of time the kom­bucha sits dic­tates the taste — a longer fer­menting period will result in a more vinegary, car­bonated batch, while a shorter fer­menting period will result in a slightly sweeter taste.

Guidone, who plans to begin bot­tling kom­bucha for friends in a service rem­i­niscent of a 1950s milk delivery system, empha­sised that homemade kom­bucha tastes much better than what you could find in the super­market.

“Maybe I’m a little bit biased, but it has less sugar, less preser­v­a­tives, and tastes very clean and fresh. When you make your own it’s def­i­nitely more organic. It really feels like you’re cleaning your gut.”

Homemade kom­bucha is also much cheaper — another factor Guidone con­tributes to the agrarian craze on campus. Whereas one store-bought bottle costs $4 – 5, Guidone can make several months worth of kom­bucha for the same price.

“I think it’s some­thing spe­cific to your gen­er­ation. There is a real interest in being able to do some­thing on your own as basic as pro­ducing food,” he said.  “It gives a real feeling of empow­erment. It’s nice to sit down at a meal and say, ‘Wow, this came from my garden. I didn’t have to rely on anyone for this.’”

Heckel speaks from per­sonal expe­rience. Together with his wife, he raises a variety of heirloom tomatoes, corn, and other garden veg­etables. Heir­looms are an “older cul­tivar of veg­etables” grown from seeds passed down from farmer to farmer. Unlike crops raised for indus­trial farms, heirloom vari­eties are open-pol­li­nated, which means pol­li­nation happens nat­u­rally without outside assis­tance and relies on natural pol­li­nation from insects and the wind. Every weekend, Heckel sells his tomatoes at the Hillsdale County Farmers Market.

“We love growing food and sharing it with others. It’s a way for us to share our hobbies,” Heckel said. “It’s not about making the extra money.”

Heckel also shares his love for plants with his stu­dents. He’s cur­rently growing morning glories for an exper­iment with his classes, and, each spring, he grows corn with his Bio 101 class as a hands-on way to learn about the sci­en­tific method.

“I’m taking botany this year with Dr. Heckel and he’s super into it planting,” senior Madie Schider said. “At the beginning of class he had us plant seeds to see what they turn into and to learn how to take care of them. We planted radishes, corn, and squash, and they’ve already ger­mi­nated and started to sprout. The faculty def­i­nitely does a good job of making us appre­ciate growing things by hand”.

Although Schider attributes much of Hillsdale’s trend towards agrar­i­anism to the faculty, her own love for planting began long before botany class. Born in Oregon’s wine country, Schider said she has always been known as the “hippy girl who loves plants.” She recalls learning how to properly grow plants by the time she was four and keeping her own plants by sophomore year of high­school.

Now, living in an off-campus house, Schider’s kitchen counter is scat­tered with an assortment of both her own suc­cu­lents, herbs, and house plants and those belonging to her housemate senior Callie Shinkle. While she’s cur­rently focussed on bringing the plants she left on campus during quar­antine back to life, she’s recently added oregano, mint, thyme, and cilantro to her growing col­lection.

Echoing Heckel’s sen­timent, Schider said, “I just love the feeling of clipping herbs from the plant and putting them right on food — it just feels a bit special.”

Michael Jordan, recently retired pro­fessor of English, has also been an inspi­ration to stu­dents. Over the years, he and his family have done every­thing from keeping chickens and veg­etable gardens, to more recently sal­vaging an aban­doned apple orchard at the edge of town.

In addition to his lead-by-example approach, Jordan has also tried to impart the agrarian spirit on his stu­dents in the classroom. Jordan taught a number of classes on the subject, including a seminar on the agrarian roots of Western civ­i­lization. In addition, Jordan said that he would teach Wendell Berry, a Southern poet, author, and “the greatest agrarian of our time,” whenever his works fit into the English courses.

For those inter­ested in agrar­i­anism Jordan rec­om­mends reading “Land and Liberty” and “The Agrarian Family Where It Belongs: New Agrarian Essay” by former Hillsdale pro­fessor Allan Carlson.

“I try to have stu­dents become aware of the impor­tance of agrar­i­anism on Western Civ­i­lization and espe­cially in the 20th century as it has become indus­tri­alized instead of family farming,” Jordan said. “One of the theses of “Land and Liberty” is that people who own their own land and cul­tivate it develop the virtues and integrities that make them good cit­izens and less pray to dem­a­gogues and tyrants because they have an investment in their land and in their person.”

Despite his age, Jordan has con­tinued to maintain the investment he has made in both his land and his person. Every fall, he chops firewood for his neighbors in exchange for fresh produce during the summer. This summer, he began working to clear shrubs and other trees from his newly acquired apple orchard to give the apple trees enough sun­light and space to grow. Of the property’s 400 apple trees, Jordan has been able to cul­tivate about 15. Although he’s the first to admit that he doesn’t prune his trees as much as he should, he promised that his apples “make some super cider.”

Whatever the reason for stu­dents’ recent return to the earth, Hillsdale’s agrarians agree that their efforts have helped to build com­munity in small ways.

“I love hearing from other stu­dents and faculty that they’ve seen my chickens wan­dering up and down Oak Street,” Mor­rison said. “Just the other day, Dr. Whalen men­tioned them and it sparked a con­ver­sation about poultry and lit­er­ature”

Returning to campus after quar­antine, Schider too reflected on the role her agrarian endeavors played in set­tling her house­mates back in.

“The herbs that I bought I actually got for my friend’s birthday, so it was kinda like a welcome home for the whole house” Schider said. “We made the plant ours for the whole house and we’re all able to use them. When we potted them I taught two of the girls how to plant plants properly so that the roots are able to spread and stay healthy. As the plants have started to grow, it’s def­i­nitely helped our house to grow together too.” 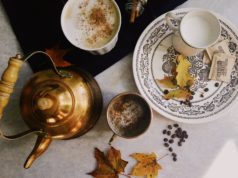