The Hillsdale College swimming team is looking to hold virtual meets this season as coaches explore ways to compete during the COVID-19 pan­demic. Head coach Kurt Kirner said he met last week with the coaches of the Great Midwest Ath­letic and the Mountain East con­fer­ences to discuss alter­na­tives to in-person meets.

According to Kirner, schools can still hold their own prac­tices and meets because swimming is con­sidered to be one of the lowest-risk sports.

“You know, it’s harder for it to linger in [the pool] since chlorine does kill coro­n­avirus,” he said. “We’re in a much better position than the sports that are playing indoors and courts, or play out there where there’s contact.”

“We haven’t started official practice yet, but we have to split up the team in half,” she said. “We can only have 12 people in the pool at a time, and there’s one person on each end of the lane.”

Although the team is thankful to practice together, Heeres admitted that it has been chal­lenging to fully welcome the freshmen.

“It’s been kind of hard to get the freshmen inte­grated in our team, espe­cially since we have seven of them. We’re trying to figure out some strategies to still bond as a team,” Heeres said. “We’ve tra­di­tionally had a really good team atmos­phere, espe­cially last year, and we really want to keep that going because it’s some­thing valuable.”

As for now, the Chargers have developed a training plan that will allow them to stay in shape until the normal season resumes.

“Right now we’re basi­cally training as we would in the off season,” Heeres said. “So that’s only eight hours a week of required team activity and prac­tices, and then basi­cally once we know what the status of our cham­pi­onship meet will be, whether it’s hap­pening at the normal time in Feb­ruary or if it’s pushed back, that will help let us know when we can move into our normal season which is 20 hours a week, because we can only have 144 days of training season.”

According to Kirner, COVID-19 is not likely to harm the swimmers on the team. Rather, he’s con­cerned that their per­for­mance will suffer if they have to stop prac­ticing before the start of their com­pet­itive season.

“I think this will bring more awareness and I’m hoping that once we get this under control, we have better things in place so that if kids are catching things, you’re not as sus­cep­tible,” he said. “Hope­fully we’re coming up with some better ways outside of the pool to not bring things into the pool.” 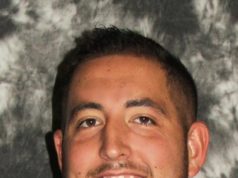