If you could live one day in the life of any fic­tional char­acter, who would you choose? Probably Conan the Bar­barian. Life is simple but it’s also very adven­turous and daring. The stakes are high, and living in a very civ­i­lized society, it’s a fun fantasy to imagine what it would be like to let your irra­tional impulses run wild. Or a detective, specif­i­cally, Dashiell Hammett’s The Con­ti­nental Op, because I also have fan­tasies of being a homicide detective. I just became a pro­fessor instead.What is one memory from your childhood that stands out to you?We were on vacation at the ocean, and we went swimming in late morning. I thought that a contact was stuck on my eye because I couldn’t see quite right. I tried to pick it off my eye because I thought it was suc­tioned or dried on and it hurt. So, I laid on the bed and every family member came around and tried to peel this contact lens off my eye. It hurt very badly so I had to go to the optometrist and it turns out what we thought was a contact lens was actually my cornea. So, everyone had taken a turn trying to pull off a piece of my eye. I got sym­pathy from my mom, but no sym­pathy from my sister or my father. They were just upset I had ruined the afternoon at the beach. Do you have any unique hobbies or talents? I used to play the drum kit.What is your fun­niest memory from college?The time I thought I lost my car but I just forgot I had parked it some­where. I had to call the police and file a report. It turned out that I had gone some­where out of my routine and forgot about it.Who is one person you’ve always looked up to? I always looked up to my maternal grand­father the most. He was such a good patriarch and he was a lawyer, a judge, and was respected by the com­munity. He was a self-made man. Because he was the younger brother, he didn’t inherit the family business. He had to carve his own path. What’s one life-changing expe­rience you’ve had that you’ll always remember? At age 35, I con­verted to Catholicism. My wife and I decided to become Catholic. It felt like a long time coming, as if there had been a real part of my spir­itual and family life that had been dormant, that became alive with my entrance into the Catholic Church. There were a lot of dif­ferent factors, so I would be hard-pressed to isolate one. A lot of my thinking about important things changed once I became a father. At that time, I was teaching at Penn State, and there was this Orthodox guy they called the Willard preacher. He would stand outside the human­ities building every day and would basi­cally play a Christian version of Socrates with the stu­dents. Between classes I would go and listen to him, and found him to be very per­suasive. That was a very big push towards thinking the­is­ti­cally at all. I didn’t convert from Protes­tantism; I con­verted from atheism, and my wife did too. All the Christian people that I was friends with at that time were Catholic. If you could film a doc­u­mentary, what would it be about?If I could film a doc­u­mentary, it would probably be about my favorite weird fiction writers from the early 20th century, namely H.P. Love­craft, Clark Ashton Smith, and Robert E. Howard. What’s one thing you used to believe that you have since changed your mind about? I grew up in a pretty liberal, pro­gressive household. Around the time my first child was born, I took a pretty dra­matic right turn towards more con­ser­v­ative ways of thinking.If you could change one thing about modern society, what would it be? I would get rid of digital tech­nology. I think digital tech­nology throws life out of balance. I think that you can create and sustain a more bal­anced state or equi­librium between human beings, com­mu­nities, and tech­nology pre-digital. Digital has a capacity to col­onize every­thing and to create a global plan­etary structure of control that re-mediates all other forms of tech­nology and flattens life to a virtual plane.What is one movie you think everyone needs to watch?  I think everyone should watch “Blue Velvet.” They should also probably prepare them­selves for it because it has some shocking moments in it. Ulti­mately, I think it’s a very con­ser­v­ative and life-affirming film that’s probably not too far off the mark of what Flannery O’Connor tries to do in her fiction. Meta­physical evil is very real and it’s why we try to create soci­eties to keep that at bay. What’s one thing most people don’t know about you? I grew an inch a couple years ago so I’m now 5 foot 8. Which 80’s or 90’s TV show do you think deserves a spin-off series? I think a spin-off series would maybe ruin it, but I wish that Seinfeld had gone for one more year. I wish that the Simpsons could get back to the golden era it was in the 90s. What is one thing you hope to impart to your stu­dents? Not to take everyday life for granted. So much of their everyday life is con­di­tioned by various sym­bolic and tech­no­logical envi­ron­ments and they should start devel­oping the habits to be able to nav­igate that respon­sibly in a way that makes living freely an ever-renewable pos­si­bility. It’s easy to give one’s agency over to an external envi­ronment. I also want stu­dents to know that rhetoric and public address is not the public speaking department, but that we offer a lot of classes and a lot of them have to do with media and popular culture. 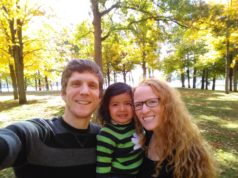 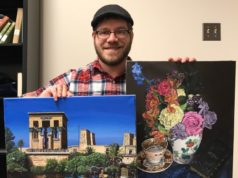 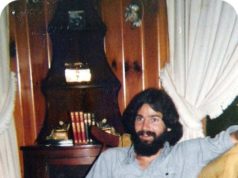