The art of raising bees is a chance to rem­i­nisce, to find peace, or to use your hands, and, in the best cases, to make some money.

Like humans, bees have com­mu­nities, rituals, roles and rou­tines — ones that endear them to those who own them.

“I don’t think you could ever really stop learning about them,” Senior and new­beehive owner Jack Shelley said.

Shelley said the hive makes natural signs, such as noise and pitch, that signal the bees’ mood. This means a bee­keeper has to know the right times of day and kinds of days to interrupt the bees’ work. If a bee­keeper chooses the wrong time or day, the hive’s buzz will change pitch and tone.

In order to learn about the subtle mood of bees and the inner workings of their hive, Shelley decided to attend a beekeeper’s asso­ci­ation meeting.

“I showed up to a meeting on Tuesday night in the middle of the semester,” Shelley said. “It was just me and four of the oldest people I’ve ever met in my life.”

The meeting turned out to be fruitful. Shelley exchanged infor­mation with Karen and Bruce Tim­berman, who own an apiary called Tim­ber­Ridge Farms. Shelley even­tually visited their apiary, received some advice and tips, and then bought two hives from the couple.

Shelley said he is inter­ested in sus­tain­ability but ulti­mately decided to buy bees because they carry a nos­talgic value for him.

“My grand­father used to take care of bees in England. I helped whenever we would go back to visit,” he said. “The idea of a home­stead, where you have things that make you self-suf­fi­cient, is also really cool.”

“It was as good as expected,” Shelley said. “It’s pretty crazy how dif­ferent honey can be from hive to hive. One of my frames tasted super minty. I think some people target that kind of stuff. They’ll put their hives by a lavender field to get lavender fla­vored honey.”

Shelley also said that taking care of the bees does not require con­stant attention, so he’s been able to keep them back home while at school.

“In general, they’re pretty low main­te­nance which sur­prised me,” he said. “I only go home once a month to take a look at things. For some people that approach is better. You want to be dis­turbing them as little as possible.”

Win­tering bees in Michigan can be quite the chal­lenge. Prepa­ration for the winter can some­times begin as early as July. The primary objective is to keep the bees warm. Prepa­ra­tions can include cre­ating insu­lation chambers or wrapping the hive in roofing paper. The bees are usually fed sugar water if their honey reserves are not enough to sustain the hive.

“Take care of them and they’ll take care of you,” Karen Tim­berman said.

Hillsdale County res­ident Darcie Miller also bought bees in May, and after a sur­pris­ingly good harvest, has begun to sell honey over Facebook. She has sold about 13 jars of honey so far.

“There are so many parts to a beehive that produce ben­e­ficial prop­erties to humans,” Miller said. “People love natural honey right from the hive. It just tastes better.”

Store bought honey is typ­i­cally heated before being bottled, which many say degrades the honey by affecting the taste, color, aroma and chemical content of the honey.

Miller said she’s con­sidered buying bees for five or six years. This year she decided to do it, so she attended a bee­keeping class in Feb­ruary. Since then, her hives have done well.

“I was only expecting to maybe get a jar for myself and my mom,” she said. “But my bees have thrived and I can’t believe how fast they’ve bloomed.”

Miller said she’s always been “fas­ci­nated with how much honey bees provide.”

“They are amazing crea­tures,” she said. “Their whole exis­tence is based on routine and schedules. Me invading their hive screws up their whole entire day. It’s like an entirely other world that pro­vides so much to us and the earth. They pol­linate 80 percent of the food that we eat.”

Both Miller and Shelley expressed a love for working with their hands. Working with the bees pro­vides a certain kind of calm from the noise of daily life.

“The ones that get into the bee­keeping business love the peace that they found out in the bee yards,” Karen Tim­berman said.

Miller said she is sur­prised by her success, but when it comes to bees, she, like many others, is learning as she goes.

“Bees are amazing. They’re almost like little people. When you watch them, they are just spec­tacular. Their whole entire process. They value life just as much as we do,” Miller said. “They take care of each other. They protect one another. They value their lives and their colony. It’s really amazing to see what they will do.” 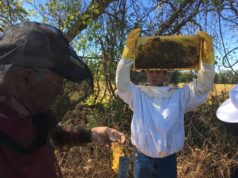