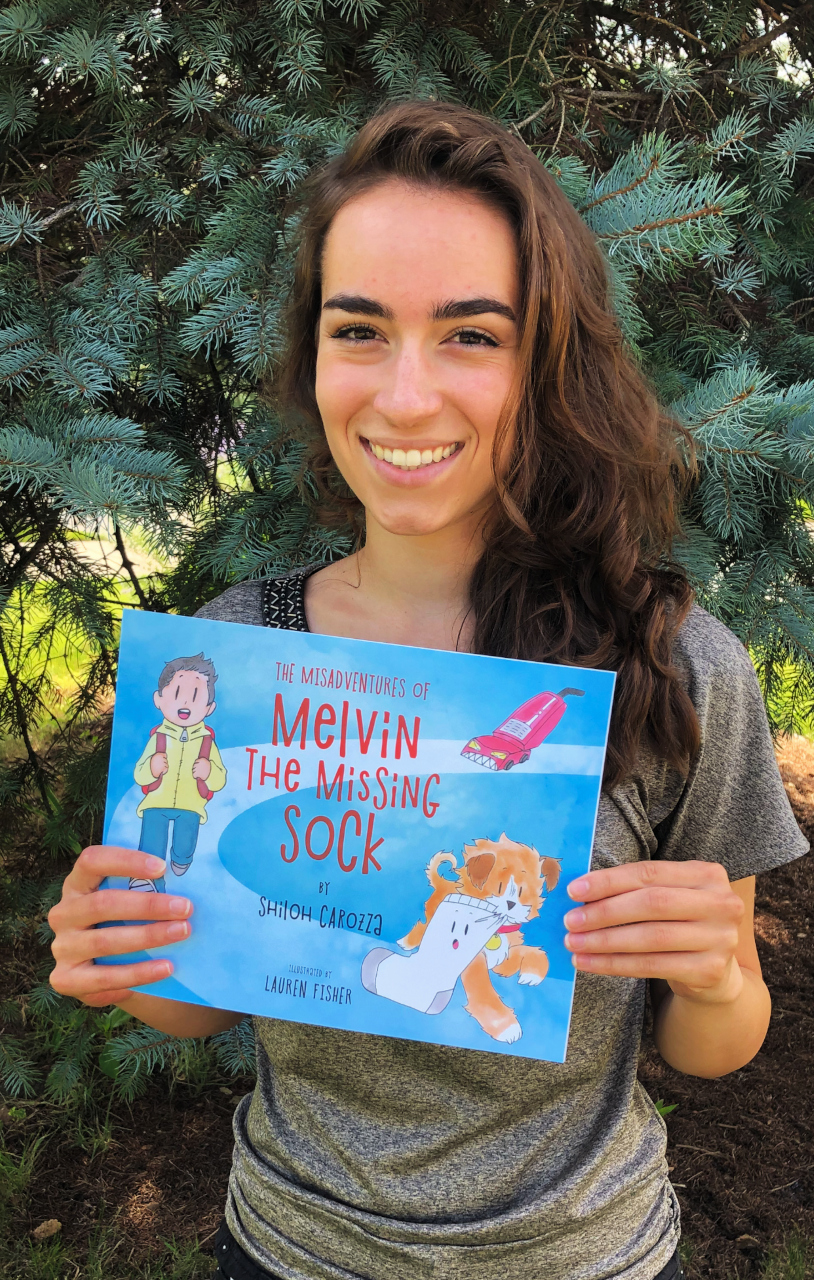 Meet Melvin, a mid-rise white sock with a pro­clivity towards the existential.

Tired of the dirt and the stink and the spin cycle, the monotony of his mid-rise life, and, espe­cially, his bland, mid-rise partner, Melvin abandons every­thing in favor of a swash­buckling quest for fame and purpose.

“As you can tell, this is a cre­ative explo­ration of what actually becomes of socks that go missing,” author Shiloh Carozza ’19 said of the eponymous char­acter in her new children’s book, “The Mis­ad­ven­tures of Melvin the Missing Sock.”

“I guess I could sum up the story by saying it is less an explo­ration of what happens to all socks but of one ambi­tious sock whose dreams lie beyond the drawer. You could almost call this a prodigal sock rather than a prodigal son story,” Carozza said.

Carozza grad­uated from Hillsdale in 2019 with a major in public address and a minor in mar­keting. She now works for the mar­keting department at Tree­works, Inc. a land­scaping company in West Michigan.

In her free time, though, she pursues cre­ative projects including writing novels, poetry, music, and now for the first time, children’s books. Carozza embarked on her mission to bring Melvin to life in May of 2019, just after she grad­uated and moved out of Hillsdale.

These serious under­tones mean a tragic fall for Melvin. The glory and fame he leaves his mate and Master (God) to search for bring him no per­manent meaning. After a series of har­rowing adven­tures, though, Melvin finds himself equally as pur­poseless as he was at home — but now he has no partner to cleave to or Master to serve. Bat­tered and torn, he returns to where he began. He is lov­ingly mended and returned to his drawer.

“I think when Melvin gets mended, he has a whole exis­tential crisis. He goes for glory, it is enjoyable, but then it goes away. That is the story of fame but everyone who wants to become the star of the show has to even­tually realize that doesn’t last forever,” Carozza said. “It’s not in the end about being remem­bered by people, it is doing right by our Master and doing right by the people that have been put in our lives.”

Kirsten Kiledal, rhetoric and public address department chair, is helping Carroza to get “The Mis­ad­ven­tures of Melvin the Missing Sock” into the Hillsdale College Book­store for stu­dents to purchase.

“I just like the fact that, although there are so many kid’s books that have lost the inno­cence great chil­drens’ books have, there is nothing in Shiloh’s book that undoes inno­cence and curiosity and dis­covery a child ought to have,” Kiledal said. “It asks good ques­tions, and you can just see the tele­ology and the true good coming out.”

Though she said she hopes it will become a classic, Carozza empha­sized that her book is not just for children.

“I did want to com­mu­nicate how easy it is for a person — espe­cially young people with our edu­cation about to do great things— to begin won­dering, ‘If we don’t end up going to D.C., why did we even go to Hillsdale?’ That is some­times an unspoken question,” Carozza said. “If you don’t go start your own business what are you doing with yourself? I think there is a lot to be said for con­tentment, but con­tentment with purpose. To find con­tentment where you are and with who you are is not settling.”

Carozza clearly takes her own advice to heart. While man­aging the mar­keting department at Tree­works, Inc., Carozza remains self-moti­vated to create and self-publish her own art.

Before “The Mis­ad­ven­tures of Melvin the Missing Sock,” Carozza self-pub­lished a novel she had been working on for six years, “The Exile,” and inter­mit­tently pro­duces original music.

As someone who has “no passion for logistics,” Carozza said the hardest part of the whole process was self-pub­lishing. To get her book on the shelves, she had to hire an al a carte for­matter, a cover designer, and illus­trator. She then had to edit, scan in illus­tra­tions, and send them to her for­matter in a digital file for editing and testing. Once she received the whole com­piled file back from the for­matter, she had to send it to a printer— who she also researched and hired. Mean­while, during this whole process, Carozza also dealt with copy­writing, bar­codes, and pricing issues, as well as simply main­taining the integrity of her creation.

Carozza has sold 100 copies of “The Mis­ad­ven­tures of Melvin the Mis­matched Sock” to date, and she ships each book herself com­plete with her sig­nature and a per­sonal inscription. She added that the whole process was a sub­stantial investment, and she will have to sell 240 copies to break even. But one part of the logistics that brought her joy rather than stress was working with Lauren Fisher, a student from her alma mater, Belding High School, to design char­acters and art for her book. Fisher, cur­rently a sophomore at the Kendall College of Art and Design in Ferris State Uni­versity, was referred to Carroza for her artistic skill by their mutual English teacher at Belding Highschool.

According to both Carozza and Fisher, they shared a similar vision for Melvin from the beginning.

“Shiloh men­tioned she wanted the art style to be kind of rem­i­niscent of “Calvin and Hobbes,” and I am looking at my own art style and I’m like, ‘Oh, I have already developed an art style, and my art does kind of look like that already,’” Fisher said. “It has the simple figures and the dot eyes. Coming up with the concept art, I just sketched out on a page some ideas of socks and colored it. I sent that to Shiloh and she said it looked perfect.”

Carozza said that the pic­tures brought her char­acters to life, and when she first saw Fisher’s sketches she “almost died laughing.”

Though the story conveys an important message, Carozza said she had a lot of laughs writing it. In fact, the idea was born out of a stand-up comedian bit she once saw about “where the heck mis­matched socks go,” com­bined with an unadul­terated senior slump of thesis and paper writing that left her thirsting for some­thing funny to lighten her mood.

Already in the throws of writing her next novel, Carozza said she enjoyed writing a chil­drens’ book for this reason.

“My novel I felt pas­sionate about and that it needed to be pub­lished,” Carozza said. “But with this, there were more heart­strings involved. I could look back on my childhood and all my stories and think, ‘This story could be one of those for some other little kid.’”

Kiledal has fol­lowed Carozza’s cre­ative career throughout her four years at Hillsdale  and is cur­rently working with Carozza to get her senior thesis, “Where Are We?: Affective Ambi­guity as the Rhetorical End of La La Land”  pub­lished. She said she sees more cre­ative suc­cesses in Carozza’s future.

“Not only is Shiloh cre­ative, but a cre­ative col­lab­o­rator,” Killedal said. “One thing I notice is that Shiloh is very inter­ested in sharing herself with others, but also with moti­vating other people. I see her doing some­thing that will provide service with other people that is going to be uplifting and motivating.”

“The Mis­ad­ven­tures of Melvin the Missing Sock” is available for pur­chase at Carroza’s website, https://inquisitiveinkpot.com/, or in the Hillsdale College Bookstore.