In Feb­ruary, Holleman was elected vice pres­ident of the College Orchestra Directors Asso­ci­ation (CODA), a national orga­ni­zation that con­nects orchestra directors to col­lab­orate and advance music in higher edu­cation. After his term as vice pres­ident, he will serve one year as pres­ident-elect and will then assume pres­i­dency the fol­lowing year.

“I’m looking forward to having our program have more exposure nationally,” Holleman said. “I’m looking forward to the ability to encourage other con­ductors from smaller schools to think outside the box and figure out cre­ative ways to get their stu­dents on campus to par­tic­ipate, and have retention within their pro­grams.”

Holleman said his approach relies on the liberal arts under­standing of music as an end within itself, rather than a stepping stone toward a career. Addi­tionally, he worked to develop a mutually ben­e­ficial rela­tionship between the college and the music department.

“I made a decision when I started this job in this program that we were going to be a music department that stood in service to the college,” Holleman said. “A lot of music depart­ments are self-con­tained, but we step forward and perform at just about every major event on campus. In turn, the admin­is­tration and dif­ferent depart­ments support the music program.”

Instead of requiring his stu­dents to “eat, sleep, and breathe orchestra,” which is often the case at large uni­ver­sities, Holleman developed a system that makes it pos­sible for non-music majors to be easily involved in choir and orchestra.

The Hillsdale orchestra prac­tices twice a week, which most stu­dents sup­plement with private lessons, and is acces­sible to stu­dents of any aca­demic dis­ci­pline. Holleman said helping con­ductors at small schools under­stand this dynamic is one of his goals as vice pres­ident.

“Pri­marily, the con­ductors went to larger schools, so they tried to apply that model to a smaller liberal arts college. And then [the approach] fails,” he said. “To base your program solely on majors, you’re not being honest with your stu­dents on what’s out there once they graduate.”

Founded in 2003, CODA pro­vides a network for college orchestra directors to connect pro­fes­sionally.

“Quite often when a college uni­versity orchestra director takes a position, they’re really the only person at the uni­versity or the college who does what they do,” Holleman said. “CODA con­nects us nationally — anybody can throw out any question or voice any dif­fi­culties they’re having with their program, and then they’re able to tap imme­di­ately into a network of college orchestra directors who do what they do.”

For the past 10 years, Holleman has served in various lead­ership posi­tions with CODA, including the roles as the devel­opment and mem­bership chairs. He also led various pre­sen­ta­tions at their con­fer­ences on the topic of music engagement at small, liberal arts schools.

Missy Osmond, former vocal teacher, has known Holleman since he began his career and has seen him transform the program.

“When he first came in he was handed the orchestra, chair, and chamber choir,” she said. “He had to wear many hats, but was able to create an extremely won­derful department that con­sists of people who love music and aren’t majors or minors.”

To increase program involvement, Hillsdale pro­vides music schol­ar­ships for stu­dents who aren’t music majors, and the music department and admis­sions work together to recruit stu­dents who can con­tribute to many aspects of campus life. This differs from other schools where only music stu­dents are expected to par­tic­ipate in music-related activ­ities.

First chair vio­linist senior Ellie Fishlock has ben­e­fitted from this arrangement. She studies exercise science and biology, but was able to fully par­tic­ipate in orchestra and receive a music schol­arship.

“I’ve been involved in music from a very young age, so coming to Hilldale was such a blessing because I could con­tinue pur­suing my passion without it being my career,” she said.

“It’s so nice how acces­sible music is here, both as a par­tic­ipant in choir and in the number of con­certs and events there are to go to,” added Teresa McNeely, a senior who has been involved in choir for her entire college career.

This approach was proven to be just as suc­cessful as many standard methods of orchestra engagement. Through a blind audition process against much larger uni­ver­sities, Hillsdale became one of only two orchestras selected as one of the best in the nation, per­formed at CODA’s 2017 con­ference at George Mason Uni­versity.

“We are the smallest college orchestra ever invited, and it was very well received,” said Stacey Jones-Gar­rison, per­cussion instructor and the  recruiter for Hillsdale’s music program. “Everyone there was blown away by what a small college orchestra was able to do. Holleman is doing things that turn the heads of larger col­leges.” 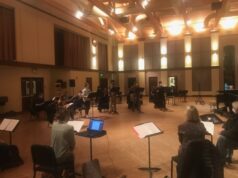 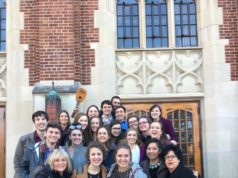