After the college rescheduled the May 2020 com­mencement to July 18 due to the coro­n­avirus out­break, many Hillsdale business owners said they did not have the level of cus­tomers they would on a normal com­mencement weekend. However, many said their shops or restau­rants were much fuller than they had been in a long time after Michigan’s shutdown.

“We were extremely busy this past weekend. I would say we were at the same level as pre-COVID,” Finish Line Family Restaurant Owner Lisa Slade said. “There were a lot of people in town, and they came out. We were only oper­ating at half-capacity, as man­dated by the state, but most people were very patient and waited outside and we served a lot of people.”

Hillsdale’s food industry saw the greatest increase of business over the weekend, with Hunt Club, The Local Eatery, and Handmade seeing high levels of foot traffic, espe­cially on Sat­urday afternoon.

“We def­i­nitely had an increase in business this weekend with all the extra family members in town,” Handmade Owner Derek Spiteri said.

Spiteri sug­gested that though numbers weren’t quite as high as they’d typ­i­cally be during a May com­mencement weekend, he believes this was a result of the strict lim­i­ta­tions on com­mencement atten­dance which the college enforced to maintain social dis­tancing. He also noted the lack of under­classmen, who he said typ­i­cally make the most of the last week of school by eating out around town.

“The crowd of people was on the smaller side that what I’ve seen before, but it was a busy weekend for us, espe­cially com­pared with us being shut down for COVID. It was def­i­nitely a good weekend for business,” Spiteri said.

As many stu­dents’ fam­ilies were only in town on Sat­urday, Hunt Club manager Terry White said Sat­urday was def­i­nitely busier than usual, but Sunday was not as much.

“It was busier than a normal Sunday, but you know we haven’t had a real ‘normal’ Sunday in a while, with COVID,” White added.

By noon on Sat­urday, Jessica Fawley, manager of Rough Draft, said she already noticed a difference.

“Anyone who’s been here knows we’ve been sig­nif­i­cantly busier already,” Fawley said. “Any business we appre­ciate. We always appre­ciate having more business.”

Local retailers saw less of an increase than food busi­nesses, but still more cus­tomers than they said they have had in many weeks.

The Blossom Shop owner Heather Webster said typ­i­cally, her florals business gets a lot of foot traffic during the com­mencement weekend, and the Hunt Club next door is “always packed.” This year, Webster said she was a little busier, but not as much as in the past.

“We’ve picked up a bit since the state reopened, but we’re def­i­nitely not back to normal levels,” Webster said.

Slade said since reopening, cus­tomers have been “more skittish” about dining in. To-go orders have remained a sig­nif­icant player in Finish Line’s bottom line. She said this past weekend was def­i­nitely good for the restaurant.

“Between the two, we’re kind of about where we should be this time of year. It’s just kind of dif­ferent, which is ok. However people want to do it, if they still enjoy our food, we’re grateful,” Slade said. 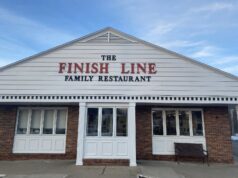 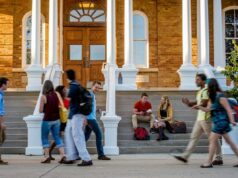 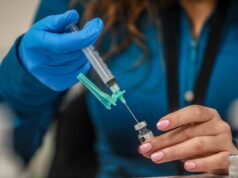