Out of all the female ath­letes from the 10 G‑MAC schools, Van Wienen proved best with impressive stats and numerous honors and awards throughout the season, including G‑MAC Vol­leyball Athlete of the week seven times, the American Vol­leyball Coaches Asso­ci­ation player of the week, and two Division II First-Team All-American honors.

Van Wienen said that when she was a freshman, she never expected these kinds of honors.

“I remember freshman pre­season like it was yes­terday and just having a con­ver­sation with my coach and him saying like, ‘This is how I think freshman year’s gonna go,’” Van Wienen said. “And we never looked past that. I just always focused on each game.”

Charger head coach Chris Gravel said Van Wienen’s ability to focus on each game is what helps her achieve such success.

“She is the one that’s rec­og­nized for the team’s success, but she’ll be the first to tell you that she focuses on the process, not just the end result,” Gravel said. “She’s been doing a great job every year on improving her skills and lead­ership on the court.”

While Van Wienen might not have expected to do so well, Gravel said he saw a lot of talent and potential before she even joined the team.

“As a freshman bringing her in, she did some things in her club program that I rec­og­nized, like some of the shots and selec­tions she was doing,” Gravel said. “And once she got here I could enhance some of the things she was already doing well with.”

Van Wienen fin­ished her junior season with 512 points, ranking second in the con­ference for total points and first with a .427 hitting per­centage. She also led the con­ference in the total blocks, solo blocks, and blocks per set, with 117, 33, and 1.13, respec­tively. She credits her team­mates and their team goals for moti­vating her to work hard on the court.

“The way I play feeds off my team­mates. Going into the season I had per­sonal goals, but they never trump team goals, which is to get to the national tour­nament,” she said. “That’s all of our goals, so I just do whatever it takes to help us get there.”

Senior setter Lindsey Mertz said she’s proud of Van Wienen and the encour­agement and talent she brings to the team.

“She’s a fierce com­petitor and has the mindset to help her overcome any set­backs. She was ready and willing to use her talent to help our team be as suc­cessful as we could be,” Mertz said. “I believe that [Van Wienen] out­shined her com­petitors not purely in skill but in her ability to motivate and inspire those around her to play to their full potential. Any honor – and there were many of them – [Van Wienen] earned was accepted with humility and grate­fulness toward her teammates.”

Van Wienen and the Chargers look to keep the momentum of success going as they head into the 2020 season. After losing a lot of their team’s depth off the bench and much of the spring season, the fall brings uncer­tainty, but Van Wienen said the team is working hard and staying disciplined.

“It was def­i­nitely a little bit weird, but we got to play in one tour­nament which I think helped a lot,” she said. “I think not having a spring season is a really good moti­vator and everyone on the team is working super hard to make up for that.” 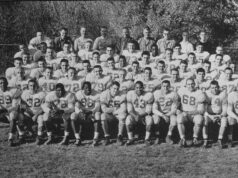 Preview: ‘A Better Kind of Glory’ documentary to premiere Monday