Louisa May Alcott’s beloved “Little Women” took the stage in Hillsdale during the last weekend of Feb­ruary and brought a fresh take on the story of the March sisters. Unsure that Alcott’s story would lend itself to a musical, it was a pleasant sur­prise to find that the musical that Allan Knee, Mindi Dick­stein, and Jason Howland wrote in 2005, didn’t botch the story entirely. It was an enjoyable pro­duction filled with energy and sen­timent that left the audience sat­isfied and smiling.

Alcott’s well known story of the March sisters has been made into at least 12 TV adap­ta­tions and six films. And after Greta Gerwig’s newest remake of the story in 2019, it felt like the musical version of “Little Women” might just be more of the same. But the musical, while still fol­lowing the story fairly well, was refresh­ingly ener­getic and different.

The casting of the pro­duction was remarkable. The script and lyrics often fell flat and are not well written, but the char­acters that the actors brought to life made the audience forget that the lines they were deliv­ering and the songs they were singing were quite cheesy and one dimensional.

Senior Abbey Bohrer played Jo March and brought energy and feeling to the char­acter that showed Jo’s passion without going over the top. Though she had to say the awful line “Christopher Columbus” as an excla­mation again and again and skip around the stage much more than nec­essary, Bohrer was still con­vincing and endearing. She made the audience laugh with her dra­matics but was heartfelt and con­vincing when grieving Beth’s, played by junior Julia Salloum, death.

Even though the focus was on Jo as the main char­acter of the play, all the other char­acters were well acted and very endearing. Meg, played by junior Michaela Stiles, was sweet and innocent but also showed that she was a wise older sister and there was more to her than her looks and smiles. Beth, played by Salloum, was per­fectly sweet and gentle while Amy, played by junior Ari­annah Gaiser, was the petulant little sister who gained sophis­ti­cation after her trip to Europe. Laurie, played by John Szc­zotka, was the per­fectly lovable next door neighbor and Szc­zotka did a great job making Laurie a fun char­acter without stealing the spot­light from the more central characters.

With a story like “Little Women” and the nature of the script, it would have been easy for the char­acters to be over­played and dra­ma­tized to the point of being corny. But the cast did a remarkably good job at making their char­acters joyful, big per­son­al­ities on the stage, but without making them fake or overblown.

The only down­falls of the pro­duction were the things that the actors could do nothing about. The script and lyrics of the musical were not very well written and relied too heavily on the audience having a pre­vious knowledge of Alcott’s story. There were numerous ele­ments of the story that were never fully explained and left those who did not already know the story of “Little Women” confused.

For instance, though a sig­nif­icant portion of the beginning of the pro­duction explored how the girls missed their father who was off fighting in the Civil War and Marmee, played by junior Sarah Nolting, had a whole song about how hard it was to be without him, Mr. March didn’t even make an appearance and left the audience won­dering what had hap­pened to him.

When Beth died, though the scene was touching and heartfelt, her death felt very abrupt and almost unex­plained. There was only one or two men­tions of her con­tracting scarlet fever and then sud­denly she dies.

Nearly every episode throughout the story felt cutoff and missing expla­nation. But the actors cannot be blamed for a poorly written script and their stellar per­for­mances in spite of it makes it more impressive. They skill­fully managed to take poorly written lines and lyrics like, “Who ever thought in all the world we’d fall in love and yet we did…amazing, the most amazing thing,” and not make them sound so banal.

Instead of drowning under the triteness of the script, the cast adroitly made the pro­duction touching and enjoyable with pow­erful singing and impressive acting. 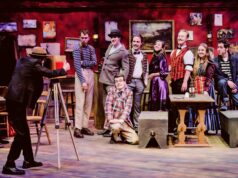 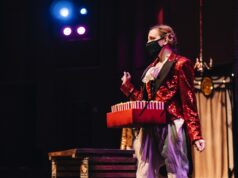 Tower Players take on God, good, and evil in retelling of book of Job 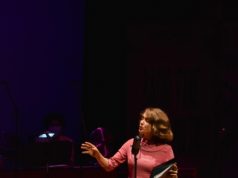