In the JAM weight room during one of the varsity men’s golf team lifts, one woman exer­cises with the men. At their practice, she swings right alongside them. Junior Grace Balkan par­tic­i­pates in all of the men’s team’s training, and she’s done it vol­un­tarily since her freshman year.

When Balkan was about 5 years old, her father began teaching her how to play golf. The sport became a family activity, since Balkan’s two sisters also played. According to Balkan, the three sisters were pretty com­pet­itive with each other.

Although the Balkans were home­schooled, the three girls played for their local public school in Mesa, Arizona. Balkan said she con­sidered playing for a college team, but decided against it because it required a caliber of play that she did not feel she had.

When Balkan came to Hillsdale College as a freshman, she looked for ways to con­tinue playing golf. Although the college did not have a varsity women’s team, Mike Harner, the assistant coach of the men’s team, told Balkan she could practice with the boys. Harner said Balkan quickly took him up on that offer.

“She came knocking on the door ready to go,” he said.

Balkan said she spent a lot of time in her first two years of college trying to form a women’s team. While other women joined Balkan in the past, all have grad­uated or quit. Balkan, however, stayed with it.

By the beginning of her junior year, Balkan said, she realized that she appre­ciates the oppor­tunity to be a one-woman team.

“The lack of a team has made me appre­ciate golf so much more,” Balkan said. “It’s really grown my game in ways I don’t think I would have with a team.”

Balkan attends all the men’s team prac­tices and com­petes for Hillsdale as an indi­vidual at various women’s tour­na­ments, trav­eling with the team when their outings coincide. Balkan will attend the Saginaw Valley State Invi­ta­tional with the team in March and the Great Midwest Ath­letic Con­ference cham­pi­onship in April.

Matt Thompson, who joined the men’s golf team as head coach on Feb. 1, said Balkan is “just like another member of the team.” The guys on the team echoed this.

Senior Ryan Zetwick said Balkan and the guys on the team did a good job of adjusting to the new team dynamic when she joined during his sophomore year.

“We all joke around with her and she jokes back,” Zetwick said. “We’re not cod­dling. We treat her like another friend.”

Senior Sutton Dun­woodie said at first he thought it was weird for a girl to join, but she quickly became an essential part of the team.

“It would be a weird and sad day if she was not on the team,” Dun­woodie said. “She has such an easy per­son­ality, so there’s no barrier between her and the rest of the team. She gets along with everyone and some­times brings cookies to the golf office. That’s just who she is.”

Dun­woodie added that Balkan has become a team leader because of her work ethic.

“When Grace was a freshman, she would walk to Hayden Park with a full set of golf clubs on her back to make it to practice,” Dun­woodie said. “It embar­rassed the rest of us because we wouldn’t want to go or would show up late, and we had this girl showing us that there were absolutely no excuses.”

Zetwick said Balkan is a good example for younger team members because of how hard she pushes herself. While many of the guys resort to prac­ticing on the inside golf sim­u­lator during the winter months, Balkan will play outside even in 40-degree weather.

Harner said Balkan works “as hard and dili­gently as anyone on the team.”

Both Balkan and her coaches would say that her tech­nique, physical strength, and mental game have all improved through her work with the men’s team. Balkan added that she is honored they “let her tag along.”

“They did not have to lift a finger to help me,” Balkan said. “I was kinda the random girl who jumped on board and they just wel­comed me in.” 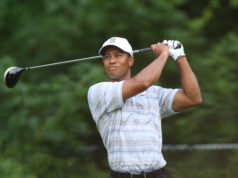 Tiger Woods proved he’s still one of the greats