The Hillsdale College Chargers capped off a four-game home­stand with a victory over the Tiffin Uni­versity Dragons on Sat­urday. Hillsdale is now 14 – 3 in the con­ference, with one last game in the regular season remaining.

On Thursday, they hosted the Cedarville Uni­versity Yellow Jackets, who got off to an early lead to start the game. The Chargers put a quick stop to that, gaining control of the game and ulti­mately winning 75 – 67, but not without a battle as the game closed.

The Yellow Jackets pulled ahead with just under nine minutes to go, leading 60 – 56. Hillsdale came back to tie the game at 62, and from there senior guard Dylan Lowry put up 12 of the Chargers’ 13 points in the final five minutes.

“Dylan’s role has changed for us over his four years,” head coach John Tharp said. “He was really a point guard coming in here…and in the last couple years we’ve had to take him off point guard to really score for us.”

Making the most of every role he was in, Lowry was able to reach a big career mile­stone during Thursday’s game.

“I’m so happy for him and proud of him,” Tharp said. “He’s done every­thing we’ve asked him to do, so it was pretty cool.”

Lowry totaled 21 points during that game to earn himself a spot among the 37 other past Chargers, including his older brother Stedman Lowry, to score 1,000 career points.

“Hitting 1,000 is one of the goals I set for myself prior to the season and it feels really good to see all the hard work that goes into the summer, the pre­season, and the season itself pay off,” Lowry said. “My family, friends, and coaches have been incredibly sup­portive which has been awesome.”

This was the first and only time Hillsdale will play Cedarville during the regular season, but there’s a chance the two teams will see each other again in the Con­ference tour­nament. The Yellow Jackets cur­rently sit one spot behind the Chargers in third in the G‑MAC rankings.

Hillsdale cel­e­brated its seniors on Sat­urday with an 89 – 77 win over Tiffin, putting together a solid team effort with 21 assists and eight steals while forcing 11 Tiffin turnovers. Four Chargers scored in double figures, one of whom was senior guard Mike Travlos who cel­e­brated his day appro­pri­ately with a career-high 11 points. Yarian tied his career high of 23 points as well, while Cartier and Lowry each added 19.

Yarian said he attributes his high-scoring game to the help of his team­mates.

“I would say it was def­i­nitely my team­mates getting me the ball in spots for me to make plays,” he said. “We had 21 assists and I think when we are playing unselfish bas­ketball, it allows dif­ferent guys to con­tribute more.”

The Dragons scored a three to put them­selves ahead 26 – 16 with 11:33 to go in the first half. Fifteen seconds later Lowry came down and scored a layup, getting the and‑1 when Hillsdale called a timeout. The Chargers came back out on the court and Lowry drained his free throw, sparking a much-needed 10 – 2 scoring run to give the Chargers a one-point advantage.

Hillsdale couldn’t hang on to its lead, however, as Tiffin headed into the locker room with a 10-point advantage at the half.

“If you remember last year’s senior night, we ended up losing and it was just a mis­erable feeling letting our seniors down after every­thing they did for the program, so we didn’t want to repeat that again,” Yarian said. “The biggest dif­ference between the first and second half was just our team defense as a whole. In the first half we weren’t in the right spots and were getting beat one on one.”

Tharp said the team talked in the locker room about the things they had covered during the week in practice that they failed to execute during the game.

“We started talking about what does it mean to have that uniform on and what’s your job here,” Tharp said. “We got out there and kinda got going. Thank God it’s a 40 minute game instead of a 20 minute game.”

The Chargers took the court and made a series of layups to score 15 points in the first five minutes and take back a 50 – 48 lead. They never looked back from there, leading the rest of the game, fin­ishing up with a 12-point victory.

On Sat­urday, Feb. 29, Hillsdale will travel to the Uni­versity of Findlay for the final game of the regular season. This highly-antic­i­pated game brings with it plenty of pressure for both of these teams. Findlay cur­rently leads the con­ference with a 14 – 2 record, with one of its losses being to Hillsdale back in December. The winner of this game will be the regular season con­ference champion.

“When we played them it was the third con­ference game of the season,” Tharp said. “You go back to that film to see how certain things are, we’ve changed some, they’ve changed some, but really this week is just about preparing for some things we’re going to see out of them and the things we have to do well in order to win, usually defensively…and making sure we’re as sharp as we can pos­sibly be.“

Findlay has a history of success on their home court, but the Chargers have the advantage over them as of right now with their early season win, along with the momentum of four tough at-home vic­tories over the last two weeks.

“We are very excited for the oppor­tunity,” Lowry said. “Games like this are the reason we play college bas­ketball. It’s going to be a hostile envi­ronment and hope­fully a tremendous game between two great teams.”

Despite the pressure of the big, espe­cially of one on the road, Lowry said the team is still ready for the chal­lenge.

“It’s been so long since we played last, we are both such dif­ferent teams,” he said. “For us, it’s going to be all about getting off to a good start and avoiding giving up big scoring runs because they can be so explosive on the offense and espe­cially at home.” 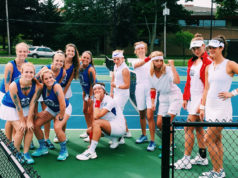 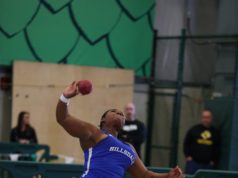