Hillsdale boasts a robust wildlife scene, but the local issue of coyotes has become a popular and pressing topic among res­i­dents.

In response to these con­cerns, Hillsdale County Com­mis­sioner Ruth Brown set up a Com­munity Con­ver­sation on Tuesday, Jan. 21 to discuss coyote sightings around Hillsdale County.

Hillsdale County Con­ser­vation Officer Edward Rice, who works for the State of Michigan’s Department of Natural Resources, spoke at the Com­munity Con­ver­sation, addressing reports of coyote sightings on the southwest border of the City of Hillsdale.

With coyote sightings throughout the city and county, Rice said, res­i­dents can trap or hunt the coyotes year-round.

“I enforce the rules and reg­u­la­tions regarding the trapping,” Rice said.“You can hunt coyotes anytime in the year. And if coyotes are doing damage to your property, or about to, you can take them at that point. With this issue being in the city, you have to get per­mission to hunt within the city limits.”

Earla Carver, a res­ident living on the south side of Hillsdale, said she’s trying to combat the coyote problem in her backyard.

“When they are on a kill, it is the hardest thing in the world to be woken up by them and listen to the poor animal that they are killing,” Carver said. “I have requested that people hunt them. I do not want traps because we have a lot of neighbors who have cats that wander. We would kill a cat.”

Several weeks ago, Carver said she was sur­prised to have a band of coyotes under­neath her deck. And although she does not always see them, she can hear them around her house.

Rice said that par­ticular part of the city has lots of pets, specif­i­cally dogs and cats, so many res­i­dents are con­cerned for their pet’s safety.

“I talked to a few neighbors and they all voiced the same concern,” Rice said. “They had seen the coyotes roaming in the streets. I told them that the reason being is based on the fact that the habitat is down from a few houses, and coyotes are scav­engers.” 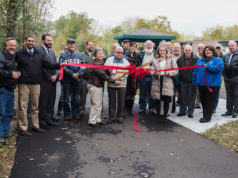