Six weeks after throwing a chair through a window at his work­place, a Taco Bell employee pleaded guilty on Jan. 27 to the “attempted mali­cious destruction of a building” in Hillsdale County Circuit Court.

Dakota Joblinski, a 22-year-old manager at the store, was arrested shortly after trashing the Taco Bell on Car­leton Road where he was employed.

According to Hillsdale County Pros­e­cutor Neal Brady, Joblinski came to the store from a Christmas Eve party that night. Angry about having to close the store, he started ripping out self-checkout kiosks, flipping over tables, and destroying the interior of the store. In the midst of his rage, Joblisnksi’s mother drove by the front of the restaurant.

“When she came to the parking lot, a chair flew through the window,” Brady said.

Other employees came to the scene to subdue Joblinski’s rage, according to Brady.

After a call from Joblinski’s mother, police arrived on the scene. Shat­tered glass lit­tered the floor, broken chairs leaned on each other, and a half-empty con­tainer of Fireball Cin­namon Whisky lay on the ground. Stepping through the mess, officers brought Joblinski out from the office in the back of the store at gun­point, according to Brady

“I’m not sure who it was that told him to clean up. How it all played out and why it played out is still unex­plained,” Brady said. “He was drunk, and he just went crazy.”

Police charged Joblinski with “mali­cious destruction of property over $1,000.” The nature of the charge means no one can know for sure what, if any, drugs were in Joblinski’s system at the time, but police do know he was intox­i­cated, according to Brady.

On Jan. 27, Joblinski pleaded guilty to a reduced charge of  “attempted mali­cious destruction of a building.” The other two charges were dropped, according to Brennon Balcom, deputy clerk of the circuit court.

Now, Joblinski awaits sen­tencing on Feb. 24. He faces a maximum penalty of two years in prison. The court has to prepare a report that factors in his family, work, and criminal back­ground for a Hillsdale County Circuit Court judge to decide on a sen­tence. He could receive the full two-year prison sen­tence, but the clerk said that’s unlikely. 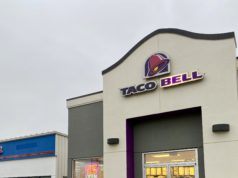 Man will face 90 days in jail for trashing Taco Bell