Hillsdale College Head Football Coach Keith Otterbein said all three players have been involved with the college’s summer football camps from a young age and have “good football IQ.”

“These guys are part of a really good recruiting class,” Otterbein said. “It is one of the strongest, deepest classes that we’ve had in my time here. The quality of the players, the fact that they’re good student-ath­letes, and the number of guys that we think are impact players are all really exciting.”

Gavin LaFollete said he grew up in Hillsdale County dreaming of playing college football and is excited to access that dream through Hillsdale College.

LaFollete started playing recre­ational football in second grade. It was in middle school, however, that LaFollete says he fell in love with the sport.

“In middle school, I was playing under actual coaches for the first time and really got to expe­rience the cama­raderie with the other guys on and off the field,” LaFollete said.

LaFollete went on to play for Hillsdale High School. In his sophomore year, he moved onto the varsity team and quickly became a leader. In his junior season, LaFollete became the team captain and led the team in tackles that season.

“In my freshman year I was looking up at the seniors thinking, ‘Holy cow, these guys are huge!’ But as I moved up, I slowly gained the con­fi­dence that I was playing at the same level as the older guys,” LaFollete said.

Despite breaking his foot in pre-season football camp the June before his senior year, LaFollete stayed with the team as a players’ coach until he could return to playing in the middle of October.

“He’s a great leader,” Hillsdale High School Head Football Coach Marc Lemerand said. “He missed eight weeks, but kept involved with the team. And when he came back, he learned a new position because he’s such a good team player.”

Lemerand added that LaFollete was “a dif­ference-maker” in the team’s playoff run this past year, leading the team to a dis­trict cham­pi­onship.

According to Otterbein, LaFollete plays with “a lot of intensity and emotion.”

“He’s one of those kids that just loves football and he’s chomping at the bit to get out there,” Otterbein said.

LaFollete said that his decision to play with Hillsdale College was influ­enced by its com­mitment to him despite his injury.

“The Hillsdale College coaches were loyal, and they kept talking to me,” LaFollete said. “Other col­leges weren’t sure because I had injured myself, but Hillsdale stuck with me through the entire process.”

His famil­iarity with the Hillsdale College players also influ­enced LaFollete’s decision to play for the school.

“I know quite a few guys on the team, and they’re good guys. The locker room sit­u­ation is great,” LaFollete said. “Everyone that’s on the team wants to ded­icate their time to win a cham­pi­onship, so everyone’s going to work their butt off and put in the work.”

LaFollete will get the oppor­tunity to reunite on the field with current Chargers Martin Petersen and Shannon Petersen, who pre­vi­ously played for Hillsdale High School.

The Petersen’s cousins, twin bothers Nick and Ben Affholter, will also be joining the team this coming fall.

“We have a high­light tape of the four of them playing at Christmas in their dress-up football gear at 4 and 5 years old and so on, so it’s going be really cool to see them all in Charger uni­forms,” the boys’ mother, Darcy Affholter, added.

Brad and Darcy Affholter planned on leaving Hillsdale, but fell in love with the com­munity while Brad Affholter student-taught at Reading High School, where the couple now teaches and the sons attend school.

Because Brad Affholter assistant-coached the Reading football team, his sons were on the field as water boys since they were about 3 years old.

“When they moved up to the varsity team in ninth grade, they imme­di­ately gained the respect of their team­mates,” Bailey said. “Their desire to play and how hard they were willing to work got those in the classes ahead and behind them to all buy in. Obvi­ously you don’t win the high school state title with just two players, but it unified the players and helped them win.”

Both Nick and Ben said they are excited to play for this com­munity at the college level, espe­cially for the same team that their father was part of and cousins play for.

“The guys on the team are very down to earth. It’s just a bunch of guys hanging out like a family. And seeing Martin go through that was really cool to me,” Nick Affholter said.

“I really enjoy playing for this com­munity. Since I’ve signed, many people have come up to me to say they’ll be coming to Hillsdale Chargers games now,” Ben Affholter said. “And it’s been a dream of ours to play with our cousins ever since we were little.”

The Affholters will be the eighth set of brothers cur­rently on the Hillsdale College football team. Otterbein said he hopes this is a reflection that the team “is doing well with brother number one, so brother number two wants to follow in their foot­steps.” 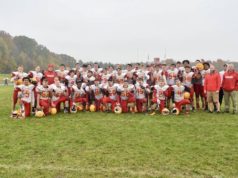 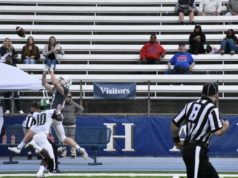 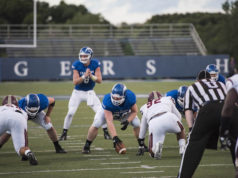 Chargers overwhelmed by No. 19 Ferris State