If you’re one of the 400 members of the Hillsdale College Jodel com­munity, you’re probably all too familiar with its “#Good­VibesOnly” mantra.

Since its arrival on campus last fall, Jodel — properly pro­nounced as “yodel” — con­tinues to grow in local pop­u­larity. According to Gustave Sauve­roche from the Jodel Head­quarters in Berlin, Germany, Hillsdale is cur­rently the 11th largest com­munity on Jodel in the United States.

Sauve­roche admits that over at HQ, our com­munity is con­sidered to be a “funny and great one” with more than 175 posts each day. All posts are anonymous, but users post under the con­dition that their words be used to promote #Good­VibesOnly. This means no names, no harassment, no spamming, and no photos of others.

The cre­ators of the app intended Jodel to be a way for people to com­mu­nicate easily and instan­ta­neously based on your geo­graphical location. They tell new users, “Never under­es­timate the impor­tance of fun. Don’t take life too seri­ously, smile and enjoy the ride.”

While it’s easy to dismiss Jodel as just another harmful social media platform used to post freely without tan­gible con­se­quences, it’s also amazing to see how our Jodel com­munity has become just that — a com­munity.

Nowhere else on campus can you find such lively dis­course among strangers about life at Hillsdale College. On Jodel, nothing is too insignif­icant to discuss. Even seem­ingly ordinary things, such as pic­tures of sunny days, become some­thing worth cel­e­brating and sharing with fellow users.

But why is Jodel so appealing to stu­dents? The posts are relatable.

Because each post is anonymous, users are more inclined to post without worry of judgement. Con­se­quently, the posts are candid, and they become instantly relatable and popular with the other users. Some poke light­hearted fun at Hillsdale culture — like the post that read, “Whoever is running the DSP Instagram deserves a raise” — while others dia­logue about over­coming the woes of Hills­dating. Still others started an open dia­logue about mental health, asking for advice before a first visit with a coun­selor and encour­aging other stu­dents to take care of them­selves during midterm season.

Jodel posts often rec­ognize out­standing indi­viduals at Hillsdale — Jodel allows users to mention public figures such as pro­fessors or celebrities by name as long as it is in a pos­itive context. There hasn’t been a week where someone hasn’t men­tioned their appre­ci­ation for “John from the Splex” and “Bobby from Saga.” Another recent post asked users to name the “Best pro­fessor on campus and why?” and users rec­og­nized Pro­fessor of History Brad Birzer, among other great pro­fessors.

Of course, Jodel’s effect on self-esteem and the com­munity are important to monitor. Like on all other social media plat­forms, there are some­times extremely insen­sitive or sar­castic posts that can easily be mis­in­ter­preted as cruel. Avid posters ought to con­sider the effect that their words have on others and strive to maintain a fun, yet pos­itive, atmos­phere.

With the increase in the app’s pop­u­larity in Hillsdale, Jodel admin­is­trators have recently increased the amount of mon­i­toring. They are aware of the impact of hurtful words and insen­sitive jokes and promptly remove any posts that violate their code of conduct. Too many infrac­tions might result in a ban from the app. In addition, each user has the ability to report any posts that he or she finds harmful to the com­munity.

The app is not com­pletely anonymous either. Users’ IP addresses are also tracked by and stored at the Jodel Head­quarters and can be accessed in case of an endan­germent of life or in severe cases of bul­lying that require police inter­vention. While Jodel values anonymity, it values the safety of all members of its com­munity even more.

And at the end of the day, it’s the stu­dents who have both the ability and respon­si­bility to promote pos­i­tivity on this campus online and in person. Hope­fully, the moments of relata­bility and con­nec­tivity won’t be limited to online dis­cus­sions on Jodel’s anonymous platform.

So go tell John that you’re happy to see him next time you’re at the Splex. Thank Bobby and your pro­fessors for their awesome work on campus and find love in the com­munity around you. Have a little fun during your college days. And don’t be afraid to share those #Good­VibesOnly with all of campus.

Luciya Katcher is a sophomore studying eco­nomics and French. 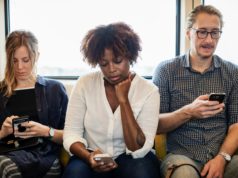