At first glance, Jodel appears to offer a quick solution to know all the ins and outs of the Hillsdale College com­munity with one scroll. For some stu­dents who struggle with social inter­ac­tions in an aca­demic com­munity, Jodel is the easy and obvious solution.

While Jodel may have good inten­tions of bringing together com­mu­nities, it’s breaking down our com­munity.

We’ve let the social media craze and the con­ve­nience it offers govern the way we interact and stay in touch as a student body. Jodel has devalued face-to-face con­ver­sation.

Jodel is a hyper­local com­munity app that, according to the app’s website, “shows what’s hap­pening in your area in real-time.” Users can post anony­mously to the app, and by “up-” and “down-” voting, users can “have the power to decide what a com­munity is talking about.”

Because Jodel allows users to say whatever they want with total anonymity, posting neg­ative or harmful com­ments on the app does not result in any tan­gible con­se­quences in the real world. Very few Jodel users stop to think how their posts may neg­a­tively affect someone or a com­munity as a whole.

One post reads, “Don’t want to try out the prez ball because everyone has con­vinced me that if you think it’s fun you are a loser.” Another user made a list of who he thinks are the hottest girls on campus.

Though not all Jodel users are neg­ative on the app — some kind user reminded his “Physical wellness peeps” about a quiz they had the next day — some of the more neg­ative expe­ri­ences can be harmful.

This kind of social pressure has been linked to self-esteem issues teens face. In 2017, Harvard Graduate School of Edu­cation pub­lished a study on social media and teen anxiety. The study cited a rise in rates of sleep­lessness, lone­liness, wor­rying, and depen­dence over the past ten years, which the researchers say relates to the increase in the use of smart­phones in that time. Further, one study noted in the research said that 48% of teenagers who spend five or more hours per day on the internet have a suicide risk factor, whereas just 33% of teenagers who only spend 2 hours per day on social media expe­rience a suicide risk factor.

The Hillsdale College com­munity could benefit from a platform where stu­dents can exchange ideas and have mean­ingful debates. But an app where people anony­mously talk about other people, often in neg­ative ways, is destructive to our com­munity.

If stu­dents really had the courage of their con­vic­tions, they could make these posts on Facebook or Twitter instead of hiding behind Jodel’s anonymity.

According to the Honor Code, “A Hillsdale College student is hon­orable in conduct, honest in word and deed, dutiful in study and service, and respectful of the rights of others.”

It’s time for stu­dents to take respon­si­bility for their words and actions, both up the hill and else­where.  Stu­dents have a duty to live up to the Honor Code they signed.

The Hillsdale College com­munity does not need an anonymous app to engage in free speech and pro­ductive debates. Through “honest word and deed,” we as Hillsdale stu­dents should strive to stand behind our actions and not back away from them.

Amelia Teska is a freshman studying the liberal arts. 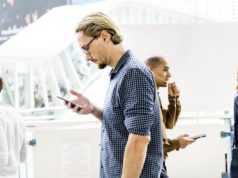