The Hillsdale College Investment Club has seen above-average growth in its invest­ments, growing by $22,000 over four years.

After receiving a $35,000 portion of the college’s endowment in 2016, the club expe­ri­enced some early losses but quickly bounced back.

“It’s been incredible ever since,” said Investment Club pres­ident and senior George Roberts. “We beat the S&P 500 last year by 648 points. There are people who are pro­fes­sionals at this stuff, who don’t see those types of returns.”

Unlike many investing clubs that use sim­u­lators, the group has been entrusted by the school to make real money grow.

“I can log onto the Morgan Stanley software right now and see that money sitting in the account,” Roberts said. “It’s not the­o­retical, like what I get in my invest­ments class — it’s real life, this is what they do in real life.”

Because of the success it has seen so far, the club takes a lot of time to con­sider when, where, and how much it should invest.

“Our investable uni­verse is hun­dreds of com­panies, and we want to find a shortlist of say 10 – 15 that we find par­tic­u­larly inter­esting — some macro-trend, or some­thing that we think is under­valued by the market,” senior Jackson Frerichs said. “We then start looking at the shortlist very intensely — ana­lyzing it, looking through financial state­ments, and coming to our own con­clu­sions.”

If the club dis­covers any of those com­panies to be good invest­ments that can be bought at a dis­count, then they will create a pitch for investing in that company to be pre­sented to the rest of the club.

“It’s usually about a 40 – 50 minute pre­sen­tation with a Q&A after­wards,” Roberts said. “And then we vote as a club, to see if we want to have that stock in our port­folio.”

Not only is the club a lot of fun for its members, it’s also edu­ca­tional.

“I knew only the basic investing ter­mi­nology when I entered the club,” Frerichs said. “I didn’t under­stand any of the fun­da­mentals. I didn’t know how to source an investment, I didn’t know how to go about ana­lyzing one, what makes one a good investment versus another, and I learned that along the way.”

Just as pro­fes­sional port­folio man­agers do, the club makes sure that its members know every piece of nec­essary infor­mation before investing, both to grow the knowledge of its members, and to make sure that a quality investment is being made.

“We dive deep in Investment Club — ana­lyzing every aspect of a company we might want to invest in,” said freshman Jason Cim­poner.

Through their investment deci­sions, Investment Club members are learning life-long skills that they can pass on.

“I really enjoyed my expe­rience in the investment club,” Cim­poner said. “I truly believe that investing is a fun­da­mental aspect of life, not just for myself, but also for my future kids.”

In his final of four years involved in the club, Frerichs summed up his expe­rience, saying, “It has been without a doubt the best expe­rience that I’ve had at Hillsdale. I’ve had a lot of great expe­ri­ences, but I’ve learned the most from Investment Club.” 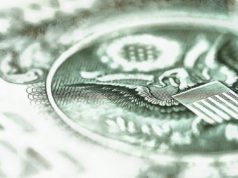 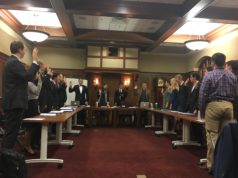