With aca­demic stan­dards as high as Hillsdale’s, main­taining a high GPA can seem as impos­sible as giving College Pres­ident Larry Arnn a sat­is­factory def­i­n­ition of the good. Since 1977, however, 48 stu­dents rose above their peers to graduate with a 4.0 GPA, according to Reg­istrar Douglas McArthur. What are the secrets of top stu­dents, and where did they end up?

According to the Career Ser­vices Office, alumni with a 3.9 GPA or above have ended up in a diverse range of fields and careers. Last year’s crop of high-achieving Hillsdale grad­uates are pur­suing careers in the mil­itary, jour­nalism, the Peace Corps, and sec­ondary edu­cation.

Nicole Ault ’19, who grad­uated with a 3.99 GPA, now works for the Wall Street Journal as an assistant edi­torial page writer. In this role, she copy edits, fact checks, and writes opinion pieces.

Ault said though her high GPA may have helped, it was her expe­rience that landed her the job. In par­ticular, she credited her expe­rience working for The Col­legian and taking the Advanced Writing class taught by Director of the Dow Jour­nalism Program John Miller as con­trib­utors to her success.

Though aca­demic achievement is important, Ault advised against chasing high numbers for their own sake.

“Don’t make GPA a pri­ority. It will make your life out of balance,” Ault said. “My goal is not the ‘A.’ It is to do my best and honor my pro­fessor by doing my best. The GPA should be sec­ondary to that.”

Catherine Bodnar ’19 echoed that GPA is not the most important factor in a thriving career after college. The first-year medical student said having a 4.0 cer­tainly helped during the appli­cation process to the Medical College of Wis­consin, but grades are not the be-all, end-all.

“Having a heart for people, being teachable and willing to learn, living inten­tionally, and not com­pro­mising on what matters most — these are more important things,” Bodnar said.

In her role securing jobs for stu­dents, Assistant Director of Career Ser­vices Jessica Malcheff  found that GPA must be paired with work expe­rience for com­pet­itive job appli­ca­tions.

Assistant Director of Career Ser­vices Rebecca Galvan said 75 to 85% of jobs are found through net­working, so she agreed that GPA is not always a reliable deter­miner for future achievement.

For stu­dents looking to follow in Ault and Bodnar’s foot­steps, the pair offered advice from their expe­ri­ences at Hillsdale and life after college.

Ault said that the straightest path to aca­demic success is to simply work hard.

“A lot of it is just being dis­ci­plined with your time and ded­i­cating yourself to the work. I am not a genius, but I think really caring about your classes and meeting with your pro­fessors when you have ques­tions or are strug­gling is so important,” Ault said.

Bodnar also empha­sized the impor­tance of hard work and meeting with pro­fessors during office hours. She said she took own­ership of her own learning by writing detailed notes, vis­iting her pro­fessors, and man­aging her time effec­tively.

Ault advised stu­dents to be careful about which extracur­ric­ulars they pick up. To make the most of her time, she said she tried to only join extracur­ric­ulars she really wanted to be involved in which, in her case, was mainly The Col­legian.

“If there is one word to describe life at Hillsdale, it would be inten­tional — making the daily, con­scious decision to be actively engaged in lec­tures, be fully present for friends, make time for orchestra, piano, vol­un­teering, and clubs, and just pour heart and soul into every sit­u­ation and moment, trusting that God will take it from there,” Bodnar said.

Rather than taking credit for their success, Bodnar and Ault singled out family and faith respec­tively as reasons for their high achievement.

“Many thanks go out to all the pro­fessors whose passion made learning a true joy, to family and mentors whose insight and wisdom pushed me to deeper reflection, and to all the people along the way whose friendship helped me become a better person,” Bodnar said.

Ault credited her faith as important for her aca­demic accom­plish­ments. When asked how to earn high grades, Ault said that besides dis­ci­pline, prayer is the most important.

“Pray through the hard times. I owe a lot to unex­pected grace,” Ault said.

College students should strive for integrity over high GPAs 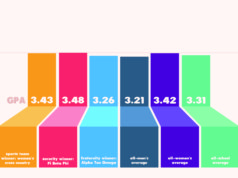