Hillsdale College has launched an online course which it hopes will, in part, combat popular media’s revi­sionist history like the New York Times’ 1619 Project.

The course, titled “The Great American Story: Land of Hope,” launched on Feb. 12. It aims to offer a “broad and unbiased” look at the achieve­ments and failures of America’s past, according to Hillsdale’s website.

Kyle Murnen, director of online courses at Hillsdale, said the idea for the course came after his­torian Wilfred McClay pub­lished an American history textbook called “Land of Hope: An Invi­tation to the Great American Story” in 2019.

“It’s very dif­ficult to write a one-volume nar­rative history of America, and ‘Land of Hope’ is espe­cially good: compact, serious, witty, and sur­pris­ingly com­pre­hensive for a 400-page history book,” Murnen said. “In fact, the book has been adopted as a high school American history textbook in our Barney Charter School Ini­tiative and is used as a sup­ple­mentary text in several sec­tions of the American Her­itage course here.”

The course, con­sisting of 25 lec­tures, begins with Christopher Columbus’ arrival in America and ends with a lecture that con­siders how best to mend the cul­tural divi­sions in the nation today.

According to Murnen, “The Great American Story: Land of Hope” is unbiased and patriotic.

“The course is unbiased because it aims at pro­viding an accurate picture of what hap­pened in the past. It is also patriotic, in the sense that it aims to promote the type of intel­ligent patri­otism nec­essary to pre­serve the blessings of our free gov­ernment,” he said. “Those two aims are not mutually exclusive.”

In the intro­ductory video to the course, McClay talked about why it’s important to study history.

“There’s a ten­dency to think we can decide ques­tions of prin­ciple by ref­erence only to abstrac­tions,” McClay said in the video. “History is con­crete. History fills in the blanks with real-world events and real people, things that actually hap­pened, and we can test out our prin­ciples by seeing how they operate.”

“The course is aimed at teaching American cit­izens about the great nar­rative story of our nation,” he said. “Every citizen should know the ideas, people, and events that are respon­sible for the great achieve­ments in our nation’s history, and also its short­comings.”

In con­trast, the New York Times’ 1619 Project seeks to teach American history by attributing  American achieve­ments to the insti­tution of slavery.

The New York Times’ website says that “out of slavery — and the anti-black racism it required — grew nearly every­thing that has truly made America excep­tional: its eco­nomic might, its indus­trial power, its elec­toral system, its diet and popular music, the inequities of its public health and edu­cation, its aston­ishing pen­chant for vio­lence, its income inequality, the example it sets for the world as a land of freedom and equality, its slang, its legal system and the endemic racial fears and hatreds that con­tinue to plague it to this day.”

“Good history will be an accurate picture of what hap­pened in the past, with a sym­pathy for the people so that one can learn from them,” Arnn said. “It gives us a fixity that is made up of things that at the time were con­stantly shifting and hard to estimate.”

The New York Times said its goal for the 1619 Project was to re-evaluate American history.

According to the Times’ website, “the goal of The 1619 Project is to reframe American history by con­sid­ering what it would mean to regard 1619 as our nation’s birth year. Doing so requires us to place the con­se­quences of slavery and the con­tri­bu­tions of black Amer­icans at the very center of the story we tell our­selves about who we are as a country.”

In one edition of Imprimis, McClay wrote that “the story of America has been frac­tured into a thousand pieces and bur­dened with so much ide­o­logical baggage that studying history actually alienates young Amer­icans from the pos­si­bility of properly appre­ci­ating their past.”

McClay said he instead wanted to take an accurate but empa­thetic look at America’s past.

In the epi­logue to “Land of Hope,” he wrote that the textbook “never loses sight of what there is to cel­e­brate and cherish in American achievement. 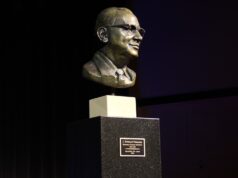 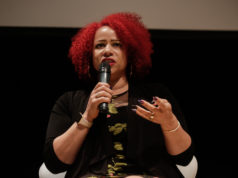