“From looking at the pre­lim­inary com­pe­tition, it looked intense,” Tong said.  “It was tough, there were a lot of people I knew and had a knowledge of their rep­u­tation that were com­peting. I got to watch some of the speeches and they were all well orga­nized and written. I think my style of speaking was dif­ferent than theirs, which might have helped me. But, it was a bloodbath to get there.”

Unlike the prompts in  past years— typ­i­cally focusing on a spe­cific political question— this year’s topic read, “How to be a good neighbor in a divided world.”

“It’s wider and not dis­ci­pline bound in anyway,” said Kristen Kiledal, Rhetoric and Public Address Department Chairman. “In some ways, it evens out the resources that each brings. They not only have to become masters of the subject matter but masters of rhetoric as well.”

Tong added that the topic is timely for Hillsdale’s audience, who rarely interacts with people who dis­agree with them.

“It’s per­tinent today because espe­cially with Trump’s pres­i­dency, we’ve seen massive divides among parties and even within parties, and in religion dif­fer­ences,” Tong said. “Looking into the outside world, there aren’t usually people who agree with us.»

“It’s not unusual that we have repeaters,” Kiledal said. “We’ve had stu­dents who make it all four years.”

Murphy says she’s excited to be back.

“Most of my prepa­ration right now involves learning my speech like the back of my hand,” Murphy said. “Once I know it back­wards and for­wards, I can just enjoy deliv­ering it without wor­rying about what I’m saying. I’m looking forward to sharing some incredible stories I came across in my research in hopes that they will touch the audience.” 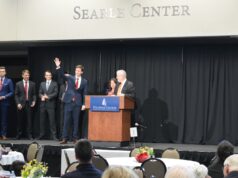 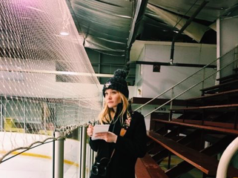