On Thursday, the Chargers won 61 – 45 against Trevecca Nazarene in Nashville, Ten­nessee, their first win since Jan. 9 against Tiffin Uni­versity. After losing to Ken­tucky Wes­leyan on Sat­urday, the Chargers are 3 – 11 in the con­ference and 6 – 17 on the season.

Senior guard Sydney Anderson led the Chargers with 15 points, going 6 for 12 from the field and 3 for 7 from beyond the three-point line. She also had seven rebounds and three assists.

Mills also had 10 rebounds, giving her her team-leading fifth double-double of the season.

The Chargers went 11 for 29 as a team from beyond the three-point line, giving them a big edge over Trevecca Nazarene. The Trojans made just one of 20 three-point shots in the game. The Chargers also out­re­bounded the Trojans, 48 – 31.

On Sat­urday, the Chargers took on the no. 24 Ken­tucky Wes­leyan Pan­thers in Owensboro, Ken­tucky. Despite playing a close first half, the Chargers fell behind for good in the second half and the Pan­thers pulled away, making the final score, 88 – 63, look less com­pet­itive than the game was.

Daf­fenberg and Touchette led Hillsdale with 18 points each. All of Daffenberg’s shots came from beyond the three-point line, and she made a single-game career-high six three-pointers in the game.

Anderson scored 10 points and added nine rebounds and three assists. Mills, although she was kept off the score­board in a rare off-game shooting, kept busy with six rebounds and six assists.

The Chargers have four more games remaining on their regular-season schedule, beginning with their final two home games. They host Tiffin Uni­versity, who they beat on the road in early January, tonight at 5:30 p.m.

Hillsdale is then off on Sat­urday before hosting Cedarville Uni­versity next Thursday in its final home game of the season. The Chargers will end the regular season with road games against Ursuline College and the Uni­versity of Findlay. 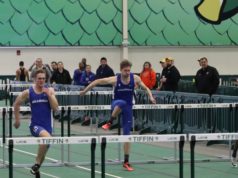