For stu­dents seeking an avenue of net­working for jobs or intern­ships, Career Ser­vices has never made it easier to connect Hillsdale alumni, parents, faculty, and friends.

In October, it launched The Hub, a net­working service ded­i­cated to Hillsdale student’s per­sonal and pro­fes­sional devel­opment, according to Director of Employer Rela­tions John Quint.

Before The Hub, stu­dents were often coun­seled to use Hand­shake while seeking intern­ships and jobs both on campus and in town. However, with The Hub, these oppor­tu­nities are easier to find as stu­dents find per­son­alized oppor­tu­nities and have mentors to guide them through their career searches.

“The value of net­working isn’t just about securing a job or internship,” Quint said, “It’s cer­tainly not the primary function of The Hub.”

The Hub pro­vides stu­dents with a chance to better under­stand one’s interests and career prospects. Through per­son­alized searches, you can find ways of gaining expe­rience and knowledge required to succeed in a par­ticular field. It also allows for external advice regarding simple things such as picking a major, editing resumes and cover letters, dis­cussing per­sonal goals with pro­fes­sionals , and expanding one’s network in a par­ticular field of interest, according to Quint.

One of the greatest ben­efits of The Hub is its student-men­torship program, in which stu­dents are paired with a mentor who will help chal­lenge and support them.

“By engaging with an alumni mentor, stu­dents will gain a deeper under­standing of the value of their edu­cation and the pos­si­bil­ities it affords,” said Director of Career Ser­vices Joanna Wiseley.” “Mentees will also learn about the actual work their alumni mentors do, which can influence whether or not they want to pursue a similar vocation.”

While the men­toring aspect of The Hub is not required, stu­dents do have the oppor­tunity to talk with pro­fes­sionals and learn about certain fields, an oppor­tunity that cannot be over­es­ti­mated.

The Hub has grown from its original 56 par­tic­i­pants in the fall, to include 456 stu­dents. There are over 2,200 users and over half of them are alumni. Some of these include: attorneys, sur­geons, teachers, engi­neers, sales man­agers, investment bankers, home­makers, exec­u­tives, entre­pre­neurs, data sci­en­tists, researchers, pastors, event planners, and graduate stu­dents, according to Quint.

Career Ser­vices Career Coach Michael Fleischer has had a mentor since the f all launch, and has received lots of helpful career advice.

“The Hub is a really pow­erful search tool because you can find alumni in any­thing and connect with them,” Fleischer said.

Hub mentors are vol­un­teers who want to be in the program and help stu­dents further their careers.

“I’ve reached out to about 10 mentors, and they all responded to me,” Fleischer said.

The time com­mitment for the program is minimal, and stu­dents can become as involved as they please. The minimum com­mit­ments are to respond to emails within 24 – 48 hours, and attend scheduled meetings with a mentor according to The Hub’s guideline form.

For stu­dents inter­ested in getting involved, the spring semester men­torship program will launch at 5:30 p.m. on Feb. 18 in Lane 123. 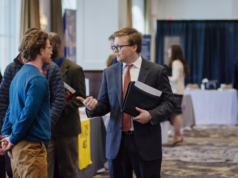 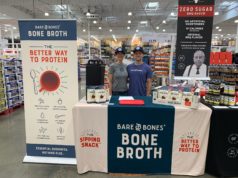