I was naive to think I would feel a con­nection to Jesus Christ during my 10-day tour of Israel.

I fell into the trap that almost every Christian falls into when vis­iting the Holy Land: believing you will have a spir­itual encounter when pre­sented with the birth­place of Christ.

Instead, what I felt at first was a dis­tance from the figure central to my faith.

When I jour­neyed with 43 other Hillsdale stu­dents this past winter break on the Pas­sages Israel tour, I saw various bib­lical sites and learned the complex history and culture of the times in which Jesus lived.

And to my sur­prise, with each expe­rience and passing day learning of the Jesus from Nazareth, Beth­lehem, Galilee, and Jerusalem, I found that Jesus became increas­ingly distant from me. I felt I did not know him.

Walking the streets of Jerusalem, expe­ri­encing Shabbat with a Jewish family who kindly let college stu­dents into their home, watching observant Jews pray at the Western Wall near the Temple Mount, exploring the ruins of a first-century syn­a­gogue in Magdala near the Sea of Galilee, and even seeing Hasidic Jews pray with their phy­lac­teries in the early hours of the morning on our flight to Israel, I rec­og­nized a rich culture I knew little about.

Coupled with these expe­ri­ences, our tour guide, Adrian, brought out the context and sig­nif­i­cance that various Gospel stories meant to a first century Jewish audience. As I learned how central Jesus’ Judaism was to his identity, I again realized how little I knew of it.

I was con­victed that my knowledge of Jesus the man was limited, and for that I felt ashamed, doubting the strength of my faith.

But then I had a dif­ferent kind of spir­itual encounter — a con­viction about the sacredness and holiness of the land I was exploring. I realized the land of Israel truly is a holy place.

Toward the beginning of the trip, I started med­i­tating on Deuteronomy 11, where God out­lines to the Israelites his love for the land he will give them, as well as the blessings he will reap upon said land if they are obe­dient. Verses 11 and 12 read: “But the land which you cross over to possess is a land of hills and valleys, which drinks water from heaven, a land for which the Lord your God cares; the eyes of the Lord your God are always upon it, from the beginning of the year to the very end of the year.”

I read that God loves the land of Israel and his eyes are con­tin­ually upon it.

I then asked God to show me why this land was so special.

I first con­sidered the topog­raphy.

In Deuteronomy 11, if the Israelites follow God and serve him, he will bestow the land with rain; if not, he will close up “the heavens.”

The natural topog­raphy of the land — a land of moun­tains and valleys — means that the land is dependent on rain to be fertile. Therefore, what makes this land unique is that its inhab­i­tants are utterly reliant on rain for their sur­vival and pros­perity. By living in this special land, as com­pared to Egypt, the Israelites had to rely on God to give rain and sustain life.

The land requires obe­dience and faith.

I then con­sidered the love Israel’s current and former inhab­i­tants have for this land.

When we visited a moshav — a coop­er­ative agri­cul­tural com­munity — at Netiv HaAsara, a town just outside Gaza, our guide Barack spoke of the danger he and his family face every day as res­i­dents.

In the past year alone, Barack’s set­tlement has faced a barrage of 10 – 12 rounds of mis­siles from Gaza — one round equaling one missile per minute for as long as 24 hours. Res­i­dents only have about eight seconds to find a bomb shelter, which is why Barack’s children sleep in one.

After all the vio­lence and psy­cho­logical terror, the people of Netiv HaAsara still do not leave the land. Despite this vio­lence, I saw a vibrant, growing com­munity on a beau­tiful piece of land over­looking Gaza.

These people, under con­stant exis­tential threat, feel tied to this land and do not wish to leave. They regard the land as sacred, and, for that reason, they will not give it up.

But not only Jews have a claim to the land. Pales­tinians, who occupied it 70 years prior, also claim it as their own.

When I heard from a Pales­tinian Christian and Muslim refugee from the West Bank, they made clear that they felt a tie to Israel, which they con­sider their proper home. Like the Jews, they view the land as sacred. For both Chris­tians and Muslims, Israel is of tremendous impor­tance to their faith.

And so, just like ancient and modern-day inhab­i­tants, I was con­victed of the sacredness of the land I was vis­iting. This was the spir­itual rev­e­lation I least expected.

Although I did not feel closer to Jesus, I expe­ri­enced a great rev­erence and awe for the land itself. I realized that the land I walked —  where Jesus walked — was holy ground, and in that alone my faith grew.

We’re moving away from the two-state solution, and that’s a good thing 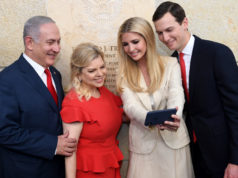