The board of Jonesville’s Grosvenor House Museum is seeking $200,000 to restore and ren­ovate the his­toric house.

The Grosvenor House was built in 1874 by Elijah E. Myers, the same architect who designed Michigan’s state capitol building. Over the years, however, the house has fallen into dis­repair, board member Ann Johnson said.

Johnson said the sand­stone foun­dation blocks are crum­bling, causing the brick to crack from the basement to the second floor.

Creger Con­struction, out of Hudson, Michigan, sub­mitted a bid of $102,000 to restore the chimney; remove and replace badly eroded brick from the walls; install sealer to exterior brick; remove 16 basement windows and install new affixed vinyl windows; and replace woodwork where nec­essary.

Creger Con­struction will be pro­viding all of the mate­rials and labor nec­essary for the ren­o­vation, in addition to cleaning out the gutters and repair any damage done to the yard during the ren­o­vation.

Johnson explained the museum board hopes to have extra money in the event of unex­pected expenses and to prepare for the future.

Johnson said the board does not know how long the ren­o­vation will take and want to leave room for price inflation in the budget. The extra money will also pay for a seal for the bricks, which left unsealed will need repairs every 10 years.

The Grosvenor House was des­ig­nated a Michigan State His­toric Site and listed on the National Reg­ister of His­toric Places in 1977. Kerry Cavanaugh, pres­ident of the Grosvenor House Museum, said the board believes pre­serving Jonesville history is the most important goal of the ren­o­vation.

The museum also has the long-term goal of repairing and opening the car­riage house for vis­itors.

Cavanaugh said that the museum board had received $2,125 in dona­tions as of Jan. 17. This money includes indi­vidual dona­tions as well as money received from Jonesville’s 100 Women Who Care orga­ni­zation.

The museum board hopes to hold fundraisers throughout 2020.

Johnson said the museum board is thinking of fundraising ideas, including a living history event at Jonesville’s Riverfest on May 16.

“One of our issues is that we are a small board with only a few vol­un­teers, and we have big ideas and needs and a limited few to carry them out,” Cavanaugh said.

The Jonesville Eagles have approached the museum board about holding a fundraiser for the house, according to Cavanaugh.

According to board member Ann Johnson, the house was orig­i­nally built for $37,500, but it would cost $5 to $6 million to duplicate Myers’ work today. There are eight marble fire­places and intricate woodwork in the Ital­ianate style.

The Grosvenor House Museum was orig­i­nally the home of Ebenezer Grosvenor and his wife Sally Ann. Grosvenor served the Michigan State Senate for one term as the lieu­tenant gov­ernor of Michigan and two terms as the state trea­surer of Michigan.

Paul Hosmer, a museum board member and Hillsdale College physics pro­fessor, said he believes the house is a special her­itage point for Jonesville.

“It is a beau­tiful Ital­ianate mansion, worthy of pre­serving in its own right,” Hosmer said. “But also locally, it rep­re­sents sig­nif­icant aspects of Jonesville’s history. The Grosvenor House is an important part of the record and the ‘poem’ of Jonesville and those who live here, as belonging to this place, have a kind of rela­tionship and duty to it.”

Johnson agreed that pre­serving the house is sig­nif­icant for future gen­er­a­tions.

“If we lose the house, we lose that history,” she said. 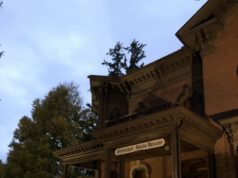 Haunting history in the Grosvenor 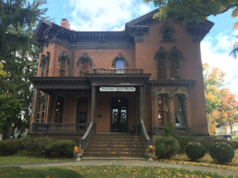