After three and a half years of debates, delays, and demands, the United Kingdom will finally leave the European Union tomorrow, Jan. 31, 2020. The final arrange­ments are messy, but also guar­antee success at a fair price for Brex­iters.

Nearly half of those who voted to leave the EU on June 23, 2016, said they did so because they believe that deci­sions made for the UK should be made within the UK. Others voted to take back control of their immi­gration laws.

Gaining the freedom of self-deter­mi­nation comes at a cost — for the United States, that cost was the Rev­o­lu­tionary War. Though the UK likely will not have to shed blood for its inde­pen­dence from the EU, it will have to fork out bil­lions to the bloc. It also risks its rela­tions with Northern Ireland and Scotland.

As Brexit Party Leader Nigel Farage  said, main­taining national sov­er­eignty and ral­lying against glob­alist gov­ern­ments are critical to pre­serve freedom, as demon­strated by the World Wars. “Social demo­c­ratic pol­itics that have over­taken Britain, Europe, and America were happy to give that all away,” he told Inside Sources in 2017. Farage is right on both points.

This version of Brexit is cer­tainly not a clean divorce from the glob­alist, unrep­re­sen­tative EU that many Leavers dreamt of and voted for in 2016. But then again, no divorce is.

A strongly-Remain par­liament stalled the process of Brexit for the past 42 months. Prime Min­ister Boris Johnson called for an election last December, which brought a sweeping victory for his Con­ser­v­ative Party. The election was his­toric, booting many Remainers from office and paving the way for a pro-Brexit Par­liament to pass a bill.

Johnson’s Withdraw Agreement Bill passed through Par­liament una­mended on Friday, Jan. 22. Then Brussels passed the terms of the Brexit deal by a massive margin, 621 to 49, on Wednesday. Britain will be offi­cially out of the EU on Friday.

For the past 47 years, bureau­crats in Brussels have had the final say on UK’s labor, immi­gration, and envi­ron­mental policies. But the EU has shown countless times its inability to manage much of any­thing — recall its mis­man­agement of the refugee crisis from 2015 – 16.

The UK will abide by the European Union’s reg­u­la­tions until the end of 2020. This tran­sition period is nec­essary for the UK to form trade deals with the EU and other nations. Johnson’s deal does not allow for another extension of the tran­sition period beyond December 2020, meaning Britain will not be entangled in the EU’s policies for much longer than it needs to nego­tiate deals. And the UK won’t slip back into the bloc.

But leaving comes at a cost. The UK will have to pay its yearly dues to the EU for 2019 and 2020, costing more than $22 billion com­bined — more than half of the $43 billion financial set­tlement to the bloc.

It’s also important to note how the deal impacts rela­tions between regions within the UK. Dis­putes between Britain and Northern Ireland, called “the Troubles,” tore apart com­mu­nities along the border as recently as two decades ago — well within the lifetime of many Gen‑Z’ers. The EU brought peace between the Nation­alists, indi­viduals who want to unite Ireland and typ­i­cally identify as Irish Catholics, and the Loy­alists, those who identify as British Protes­tants. Britain and Ireland’s mem­bership in the EU assured free trade across the border of Britain and Northern Ireland.

Free trade and free movement across this border must be the first thing Britain addresses to protect the region from another bloody con­flict.

And Trident, the UK’s main nuclear deterrent system — which includes four sub­marines as well as mis­siles and war­heads — are located at a naval base in Scotland. Further, Scotland’s 2014 ref­er­endum on whether or not to remain in the UK was pred­i­cated on the UK’s mem­bership within the EU. Many predict a second Scottish ref­er­endum to create an inde­pendent Scotland that would  poten­tially rejoin the EU.

Whether or not the EU’s laws were ben­e­ficial to the UK, it’s the duty of a body of people to decide these reg­u­la­tions for them­selves — not leg­is­lators from far-off coun­tries, with no knowledge or con­nection to the British people.

The Brexit Johnson delivered isn’t entirely what Leavers wanted, or what it could have been with a better deal. Britain is learning for them­selves that achieving national sov­er­eignty — freedom for one’s country and its people — isn’t free. But it is worth it.

Alex Nester is a senior studying eco­nomics. She is the opinions editor for The Col­legian. 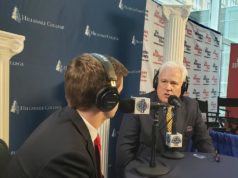 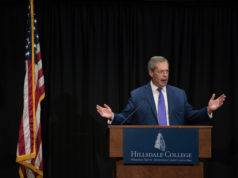 Behind Brexit: Nigel Farage speaks on the growing ‘democratic’ revolution