After the Chapel ded­i­cation in October, con­struction crews fin­ished the entire interior, with the exception of two pieces: the large organ and some addi­tional sound equipment.

According to Chief Admin­is­trative Officer Rich Péwé, there will be a chancel organ ded­i­cation on April 16.

“The organ is a special and important thing,” Péwé said. “It’s a musical instrument, so we’ll have a concert in the evening and a con­vo­cation.”

Over the past year, the college has been slowly ren­o­vating Mauck Ele­mentary, espe­cially the upper floor. Once ren­o­va­tions are com­plete in 2020, the Barney Charter team will move from their tem­porary location on the upper floor of the Dow Center to the ele­mentary school.

“The move puts them closer to the Academy which is good because they work closely with the Academy,” Péwé said.

In addition to pro­viding office space, the ele­mentary school could poten­tially provide classroom space for filming Hillsdale Online Courses, as well as a venue for charter school teacher trainings in the summer.

“It’ll be nice for us to be in a school,” Assistant Provost for K‑12 Edu­cation Kathleen O’Toole said. “We’re all former teachers and former prin­cipals. It will feel like home.”

The next large-scale con­struction project slated for the college is the ren­o­vation of Dow A & B.

The growing number of CCA attendees and other public func­tions neces­si­tates remod­eling Dow’s facil­ities. While there is no official timeline at the moment, the college is raising funds for a ren­o­vation.

Cur­rently, cur­tains close off the entire second-floor mez­zanine. Under the new plans, the roof will be con­verted into an atrium-style roof, allowing natural light to come in. Fur­thermore, the upper floor will be trans­formed into archival storage for vis­itors and stu­dents to peruse Hillsdale’s many rare arti­facts.

“We have museum-quality cases for archival material, rare books, and things we’ve been given,” Péwé said. “I think it would give a space for a visitor, or somebody staying in the hotel, where they can read or feel more con­nected to the college.”

Unplanned ren­o­va­tions came for Hillsdale with the October rain­storms. Benzing Dorm flooded for the first time.

The intense October rains streamed quickly down Barber Drive, filled the drainage con­tainers near the Slayton Arboretum, and pooled along the backside of Benzing. Even­tually, the rain water found its way into the building, filling the basement with several inches of water.

Res­i­dents had the option to move out on Monday, Sept. 30, when it first flooded; however, those who did not move out encoun­tered a second flooding on the Thursday of that week, according to Benzing House Director and senior Hadiah Ritchey.

“Everyone had moved out a lot of stuff at the time of the second flood,” Ritchey said, “I’m sure it was mis­erable to have woken up twice in one week from water.”

The deans were able to find alter­native housing options for the 14 women who had to abandon their dorm rooms.

Despite the large amount of water in the dorm, the hard flooring was not damaged, and con­struction crews only needed to re-carpet the basement hallway and clean up the floors in the rooms.

To ensure it does not happen again, the parking lot was reshaped to keep water from coming into the lot, and the drainage wells were expanded. 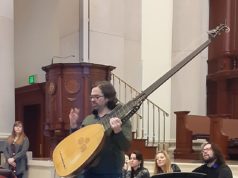