Remaining at Hillsdale College did not fit into Jonathan and Lindsey Churches’ ’17 original plans of teaching, getting master’s degrees, and going to law school. However, the couple have stayed on staff to help run the Mock Trial team at Hillsdale College ever since grad­u­ating three years ago.

“In a way, I never left,” Jonathan said. “I was not expecting to stick around here. I did not antic­ipate that hap­pening.”

Like many stu­dents who come to Hillsdale, Lindsey and Jonathan were inter­ested in dif­ferent fields, but changed their minds. Both found that they wanted to be involved in the clas­sical side of things. Lindsey said she orig­i­nally wanted to pair math and eco­nomics, but fell in love with clas­sical edu­cation.

“I realized that I just loved math for itself and I was also kind of simul­ta­ne­ously getting inter­ested in liberal arts edu­cation and clas­sical edu­cation,” Lindsey said. “So I decided that I wanted to teach math instead.”

Jonathan said he started out wanting to study pol­itics and was looking into law school, but once he started taking classics, he changed his mind.

The Churches have been involved in Mock Trial from the beginning. While Lindsey was pur­suing a math major and Jonathan a classics and phi­losophy major, they com­peted in Mock Trial as stu­dents all four years. By his junior year, Jonathan was helping to manage the team as well as com­peting, working under Mock Trial coach and Hillsdale County’s Pros­e­cuting Attorney Neal Brady.

The original plan was for both of them to teach at a clas­sical edu­cation K‑12 school and for Jonathan to go to grad school, but their paths took a turn in their last semester of senior year when Brady didn’t have anyone else to float the program.

“It’s an oppor­tunity for Hillsdale stu­dents to go out and test them­selves in a public speaking envi­ronment that pits them against the best under­grads in the nation,” Jonathan said. “I looked at that and I said, ‘That’s some­thing worth­while. That’s good, and I don’t want to let this die. I don’t want to see the team suffer because nobody’s willing to lead it.’”

For the first two years, the Churches drove two hours to Detroit to teach, and for every Wednesday and many weekends, they would drive back to the college to coach after a full day of teaching, often spending late nights fin­ishing work, helping team members, and studying.

“Coaching public speaking teams, you’re always on call,” Jonathan said. “And we practice late in the evening because there’s no way we’re going to practice during the day.”

Though the Churches had a great expe­rience in Mock Trial as student, the team didn’t often compete on national levels. Over the past three years, however, the team has become more focused and com­pet­itive; it now com­petes with high-level col­leges and uni­ver­sities.

“What I think really offers a lot of good to stu­dents is the com­pe­tition is quite high,” Jonathan said. “We don’t compete against little schools in Mock Trial. In the last couple tour­na­ments, we were in com­pe­tition with Penn State and Michigan and Columbia, Yale, and Brown.”

According to Lindsey, staying in Hillsdale has allowed her to get to know the com­munity on a dif­ferent level, and she likes the famil­iarity.

“It was actually really great that first year to have the team and to have Hillsdale. We got to come back to the place that we knew well and to the group of people that we knew well,” Lindsey said. “It was almost like a family envi­ronment. That was actually very mean­ingful to me. Getting to know the com­munity of Hillsdale as a town more fully has been a blessing.”

Lindsey said seniors can take the spirit of the Hillsdale com­munity with them and create it wherever they go, even if they’re not staying in Hillsdale post-grad­u­ation.

“Obvi­ously not everyone who goes to Hillsdale can come back, nec­es­sarily,” Lindsey said. “I think a big thing is just taking what you learned at Hillsdale, not just the knowledge that you learned but how you interact with people and treat people, and cre­ating that sphere wherever you end up.”

Junior Sophia Klom­parens, a Mock Trial com­petitor, said the Churches are “like adopted family.” She can go to them with ques­tions about life and count on them to help her grow.

“I can hon­estly say I am a more mature person because I know the Churches,” Klom­parens said in an email.

She said she remembers talking to the Churches on long van rides to tour­na­ments, having con­ver­sa­tions about her family, goals, and interests.

“I remember being really sur­prised that they didn’t just care about me as a Mock Trial com­petitor, but they wanted to know who I was as a person. That’s a huge part of why I keep doing Mock Trial year after year — because of the caring envi­ronment the Churches foster in the program.” 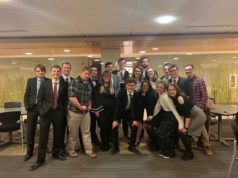 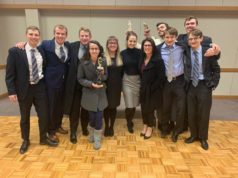