The track was clear and the weather was fair for the Hillsdale College Women Com­mis­sioners inau­gural Charger Derby. Held Nov. 2 in the Searle Center, the fundraising event raised roughly $100,000 for student schol­ar­ships and attracted 255 guests for an evening of sim­u­lated horse racing and a silent auction. The Women Com­mis­sioners hosted the virtual derby in lieu of their annual rummage sale, which was last held in 2017 and was their biggest fundraiser for years.

They were delighted with the turnout. The event drew guests from near and far, both friends of the college and people from Hillsdale County, decked out in derby dress. Many of the ladies wore flam­boyant hats and head­pieces and several men sported dapper details, including a horse-motif bow tie. One couple came cos­tumed as a horse and jockey.

Art faculty pro­vided their work, including Samuel Knecht, lec­turer in art, who donated a painting, and Barbara Bushey, pro­fessor of art, who gave hand-painted scarves.

An app allowed guests to bid remotely from their phones, opening the silent auction to event attendees and out-of-town par­tic­i­pants alike.

The silent auction gen­erated $42,000 of the event’s revenue, with each item receiving nine bids on average.

Dressed in blue shirts, current recip­ients of the Women Com­mis­sioners schol­arship vol­un­teered to assist with running the event. Jaime Boerema, a junior, said she was happy to help.

“We’re really grateful that the Women Com­mis­sioners want to give back to campus and have blessed us per­sonally, and we want to con­tribute back to that tonight,” she said.

Just before 8 p.m., a bugler played the “Call to Post” to com­mence the virtual horse races. Judy Gabriele, Director of Devel­opment at Hillsdale Hos­pital and a member of the Women Com­mis­sioners, delivered opening remarks.

“Our work is noble, and I wish to thank each Woman Com­mis­sioner here tonight,” she said, noting that over the past 40 years, the Women Com­mis­sioners have raised $4.2 million for schol­ar­ships.

And then it was off to the races. Footage from a dozen past horse races pro­jected onto screens beside the stage, with a live master of cer­e­monies pro­viding com­mentary. Guests bid on one of the 10 horses in each race, placing their votes in buckets at the front of the room.

“You may have to jockey for position to see your horses,” said master of cer­e­monies Steve Cox, who came from south of Pitts­burgh to host the event.

Guests watched the screens intently as horses with names such as Hill Filly, Mr. Mar­ket­house, and Commissioner’s Winner gal­loped coun­ter­clockwise around the track. William Broadbeck dubbed his horse No More Rummage, a nod to the erst­while rummage sale.

Between races, bids from the silent auction were dis­played on the screens and the master of cer­e­monies read quotes from recip­ients of Women Com­mis­sioners schol­ar­ships.

“Hillsdale is the best decision I’ve made and the Women Com­mis­sioners made it pos­sible,” one read.

Elli Leutheuser, ‘51, said she was pleased with the event.

“It’s fan­tastic,” she said. “It looks like everyone is having a good time.” 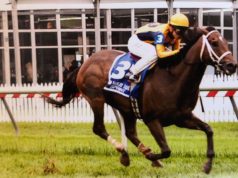 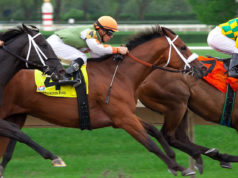 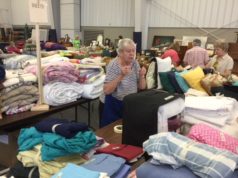