Motor vehicle owners lost approx­i­mately $6 billion in theft in 2018, according to the Insurance Infor­mation Institute. Between 2016 and 2018, 229,339 vehicle thefts con­tained keys or fobs left in the vehicles.

Despite the safe­guard of the Honor Code and the general respect for others that cir­cu­lates throughout the Hillsdale College student body, the honor isn’t unbreakable and doesn’t extend beyond campus.

There were over thirty break-ins in the city of Hillsdale during the first two days of the vehicle theft spree, but the robbers only con­fis­cated cash from unlocked cars off-campus. Later in the week, however, they ven­tured onto some campus parking lots. They fol­lowed the same trend of taking strictly cash from unlocked cars.

At Hillsdale, we’re for­tunate enough to leave our back­packs lying around in the student union while we run to the bathroom or leave for class all day without wor­rying about theft by other stu­dents. This is a product not only of our stu­dents’ strong, per­sonal code of morals, but also because of the encour­aging Honor Code.

Only stu­dents of the college sign the Honor Code, however, and we, stu­dents, need to take heed against unfor­tu­nately common criminal inci­dents. Hillsdale, although a quaint and overall safe town, has its dangers.

When stu­dents walk alone at night, fail to lock their houses and cars, or let their guard down when they’re holding cash in Kroger, they’re putting them­selves at risk.

It is part of the idyllic Hillsdale culture to assume everyone abides the same honor code we do, but that is not the case. Although stu­dents ought to practice their own honor code everyday when outside the safe haven that is campus life, it is nec­essary for them to also take basic safety mea­sures to prevent poten­tially dan­gerous sit­u­a­tions. 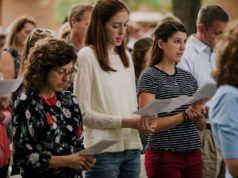 Legacy of Honor Code, Freshman Pledge: College is a commitment, not a commodity