At a book signing at UCLA over the weekend, Donald Trump Jr. shut down his own keynote address just 20 minutes after it started.

When people attending the event, spon­sored by the con­ser­v­ative activists of Turning Point USA, learned that there would be no question and answer session, they began to riot and chant “U‑S-A” and “Q‑and‑A.” Former Fox News con­tributor Kim­berly Guil­foyle, also on the stage, responded to the audience by mocking the rioters’ ability to get a date, esca­lating the problem even further.

While much of Twitter imme­di­ately took sides in the debate, it raises an issue that can’t be solved in 280 char­acters. What’s at stake here is deeper, and it’s killing the free flow of ideas our founders sought to protect.

Debate breaks down when a growing sector of Amer­icans feel their voice won’t be heard unless they shout.

The point of our repub­lican form of gov­ernment was never to stifle fac­tions, as Madison writes in Fed­er­alist 10, but for them to compete with one another, in the hope that only the most prudent ideas would succeed in winning wide­spread approval.

When we shut down those who question our ideas, it sug­gests we can’t actually defend them. It sug­gests our ideas are imprudent.
If speech is to remain free, we can’t shut down ideas we dis­agree with — espe­cially those on our own side of the debate.

Sti­fling hot air only makes it hotter. It’s better to let out the steam. 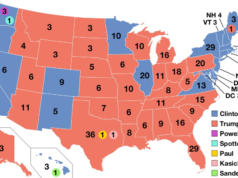 In defense of the Electoral College: Choose liberty over democracy