When Gary Oldman, Antonio Ban­deras, and Meryl Streep are com­bined in a cast and directed by Steven Soder­bergh, it shouldn’t be unrea­sonable to expect a good film. Appar­ently it was too much to ask of Soderbergh’s new Netflix original, “The Laun­dromat,” however.

While watching the film, my mind tried to trick me into thinking I was simply not seeing what made “The Laun­dromat” a great movie.

Soder­bergh tried his best to make “The Laun­dromat” clever by making it a dark satire, made up of a series of vignettes, drawn together with two uncon­ven­tional nar­rators. But the end result was a garbled mess and an inco­herent nar­rative with an obnox­iously-pointed political statement.

“The Laun­dromat” is a loose explo­ration of the 2016 Panama Papers, 11.5 million leaked doc­u­ments con­taining the attorney-client infor­mation of thou­sands of U.S. off­shore financial accounts and entities. These papers were taken from the Pana­manian law firm Mossack Fonseca, a cor­porate service provider and one of the biggest providers of off­shore financial ser­vices. But in 2015, whistle­blower “John Doe” leaked the papers showing that some of Mossack Fonseca’s shell com­panies were being used for illegal activity — mainly fraud, tax evasion, and evasion of inter­na­tional sanc­tions.

“The Laun­dromat” tries to sum up the Panama Papers and gen­erally explain things like trust funds, tax evasion, shell cor­po­ra­tions, off­shore accounts, and insurance fraud. Soder­bergh tried to make the story and col­or­fully odd and fresh by making Jurgen Mossack (Oldman) and Ramon Fonseca (Ban­deras) the nar­rators of the vignettes that he threw together. Each vignette is a short example of the dif­ferent financial ser­vices that Mossack Fonseca pro­vided, showing how easily some­thing like an off­shore entity, which is per­fectly legal, can be used for illegal pur­poses.

Streep is the widow in one of these vignettes who becomes a victim of insurance fraud when her husband trag­i­cally drowns in a boating accident and she cannot collect the full set­tlement. She begins poking around only to find that United Re-Insurance Group is a shell cor­po­ration (thanks to Mossack Fonseca), neck deep in shady business and running shell cor­po­ra­tions for some ques­tionable people. From there, Mossack Fonseca unravels as cor­ruption and illegal activity is uncovered.

As the movie pro­gresses, it exploring other vignettes that could be inter­esting, but alto­gether turn into a jumbled mess that even­tually is numb and boring.

Soder­bergh is known for his exper­i­men­tation in movies, and the general idea and goal of “The Laun­dromat” could have been a good one. Back in 2015, the film “The Big Short” did a great job of taking complex financial schemes  and explaining them in an acces­sible, inter­esting, and dra­matic form. The Laun­dromat could have done the same, and maybe in an even more inter­esting way, since Soderbergh’s approach to sto­ry­telling is always col­orful and cre­ative. That’s why it’s even more of a dis­ap­pointment: It could have been so good.

But aside from the ram­shackle nature of the sto­ryline, the movie’s political statement beats the audience over the head. Even if you agree with the political message, it’s not com­fortable having it drilled into your eye­balls throughout the entire movie. When Streep ends the movie with an impas­sioned mono­logue about how corrupt American finance is and how much it needs reform, it’s hard to care. Soder­bergh tried to evoke outrage at a broken and corrupt financial system, but by the end he’s shot the audience in the head with his political statement gun so many times that the audience is numb.

It’s a real mis­fortune that so much talent and expe­rience could be gathered into one movie and yet still manage to be a dis­ap­pointment. “The Laun­dromat” had the potential to be so good, but then fell on its face. 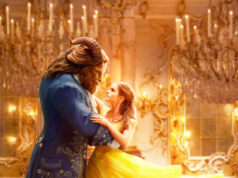 ‘Beauty and the Beast’: Tropes as old as time, wrongs as old as rhyme