As my time at the Wash­ington-Hillsdale Internship Program in Wash­ington, D.C., comes to a close, I find that my expe­rience of Hillsdale in D.C. is dif­ferent from life on main campus. Though the things I’m reading and writing about may be com­pa­rable to a Hillsdale class, these classes are located in the heart of American pol­itics. The culture is fast-paced and focused on effi­ciency — despite the bureau­cracy being so slow.

During my semester in D.C., I’ve come to realize that choosing what many would con­sider a less effi­cient way of doing things for both my own sake and the sake of the com­munity might create a more mean­ingful life. After spending the summer in Hillsdale, and then moving to D.C., the dif­ference between the two has only shown me that this prin­ciple can lead to a happier life wherever one may live.

Over the summer, I lived in the Paul House with four other girls. I lived a few minutes away from friends who lived in town. We cooked together, ate together, and lived a rel­a­tively simple life — nothing exciting or as fast-paced as the city. Effi­ciency, as a prin­ciple which sub­or­di­nates our time and efforts to pro­duc­tivity, was not really on my mind. This isn’t to say I sat around and did nothing; in fact, I read more than I ever have in a summer. But these choices weren’t dic­tated by a desire to consume or produce.

During that time, I read Wendell Berry’s “Hannah Coulter,” which tells the story of a woman who grew up farming and dies farming. Her time as a parent, however, comes when family farming is quickly fading away and being replaced by agrobusiness, and she must face the prospect of her children going to college and aban­doning their family’s way of life.

The life of Hannah Coulter rests upon the assumption that to stay put is almost always the better option, and not just for its own sake. The passing on of tra­dition, her­itage, and family nar­rative works best when the same family lives and works on the same land for gen­er­a­tions. But it’s all ter­ribly inef­fi­cient.

Berry rec­om­mended a dif­ferent way of thinking about life, and it’s not that everyone should become a farmer. It is that effi­ciency, which inevitably leads to total inde­pen­dence, is not the path to adulthood. Instead, the right way to live life might be to live near your parents and shape your life around your friends and family, not your career. Planning out every hour of your day might not result in a day well-lived.

This approach to life looks dif­ferent for dif­ferent people and dif­ferent cir­cum­stances. Maybe you should plan out your day if you have a great deal of things to do. Maybe you should move to D.C. for that job oppor­tunity on Capitol Hill. But the prin­ciple in mind should not be how can I be both effi­cient and inde­pendent — throwing off childhood depen­dence — but rather, how I can be suc­cessful while still engaging real­is­ti­cally in and con­tributing to my com­munity.

Living in D.C. means I can wake up on a Friday morning after a busy week, and I’m not sure if the week has even begun yet. Con­fused and unat­tached to the week, it’s only until Friday night that I feel I’ve truly woken up to it.

As humans, we look for signs in our lives which point us to a greater, deeper reality. Life can be both busy and full of these signs. But if we choose to make effi­ciency the pri­ority, these signs, and a deeper reality, are lost. If we choose our own inde­pen­dence over our involvement in a com­munity, we deny the inter­con­nect­edness of reality.

Living in Hillsdale after grad­u­ation or fol­lowing your friends else­where to form a com­munity may be better than taking the most prof­itable or pres­ti­gious job in D.C.

Even if you can’t move back home or live in a com­munity of friends, shared life is some­thing every human person needs. At the root of our exis­tence is the exis­tence of another: God. Depen­dence is a fun­da­mental part of our nature. When we choose effi­ciency by default, we create an inde­pen­dence from reality by chis­eling out our own narrow chunk of it for our success in achieving said effi­ciency. This denies our exis­tence as dependent.

In D.C., studying with other stu­dents in the Kirby Center reminds me that living life inde­pen­dently and autonomously in the city is not a real way to live. That doesn’t mean you can’t have a good com­munity while living in the city. But you may need to actively seek out friendship and com­munity since the city does not, by the very nature of it being a city, lend itself nat­u­rally to com­munity.

Doing an internship, taking classes, having a social life, and finding time for leisure becomes a con­stant jug­gling act. To sac­rifice the inter­con­nect­edness of all of these things for efficiency’s sake would be to lose their meaning.

Living life inef­fi­ciently or with your friends doesn’t mean you can’t live in D.C., or work in pol­itics. It just means that your life will be a series of sac­ri­fices to the com­munity regardless of what you do.

The framework with which you view your job should not be defined by effi­ciency, but rather by an under­standing of the whole of yourself, your com­munity and ulti­mately, reality.

At Hillsdale, the com­munity is cen­tered around learning and edu­cating the soul, and pol­itics is another subject to study. Even though we are in D.C., we can’t forget that we are still part of a com­munity of stu­dents here, and that this com­munity is meant to nourish both us and the city we live in for a semester.

Emma Cummins is a George Wash­ington Fellow and a junior studying pol­itics. 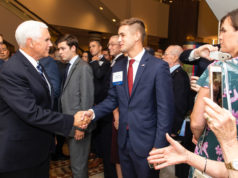