When stu­dents in Hillsdale College Pres­ident Larry Arrn’s Nico­machean Ethics course walked into Broadlawn for class last Monday, they had no idea they’d get to see an artifact most would only see behind plex­i­glass at a museum — one from the time of Aris­totle.

Before the start of class, Arnn revealed to stu­dents and a few special guests a 2200-year-old Grecian urn, which President’s Club members Charles and Anne Koch donated to the college.

“Chuck does sweet things. He thinks it’s beau­tiful and he wants us to have it,” Arnn said.

The Kochs, who live in Florida, have been friends of the college since the late ’80s. Since then, they have donated finan­cially to the college and the Barney Charter School Ini­tiative and given gifts like a model fishing ship and black walnut wooden carvings of the four seasons for Hillsdale Academy.

When Koch pur­chased the urn from a friend and col­lector in Florida, he built a car­rying crate and pack­aging for the artifact. He and his wife then drove the urn from their home in Citra, Florida to Hillsdale in an RV to keep it safe. He also asked a friend, who has a Ph.D. in ancient pottery, to confirm the urn’s authen­ticity.

Alongside the Kochs, Arnn pre­sented the urn to his class on Aristotle’s Ethics, which meets in the dining room of his home at Broadlawn.

“It was really incredible to be able to see the history and lit­er­ature that we learn at Hillsdale come together in a piece of art,” senior Ben Diet­derich, who wit­nessed the unveiling, said. “It demon­strated in a physical sense the true beauty of our edu­cation.”

Koch said he wanted to give the urn to Hillsdale because of what the school pre­serves and stands for.

“I feel what the school is doing is very important to our society and our future society as we move forward,” Koch said. “I’m always looking for things that I can do to help along the way.”

Koch, who is now retired, worked as a designer. His company designed the inte­riors of museums, public buildings, and cor­porate lobbies, as well as a few Asso­ci­ation of Tennis Pro­fes­sionals facil­ities across the country. Koch said he looks at space dimen­sionally and thinks dimen­sional pieces have some­thing to offer to stu­dents that’s dif­ferent from 2D items like papers and books.

“When I see a problem or sit­u­ation where I would like to help the com­mu­ni­cation between stu­dents and pro­fessors, I see not so much in written books that are printed, but I’m looking for some­thing dimen­sional to help bring the message to the stu­dents,” Koch said. “They were talking about Aris­totle, and one of the things the pro­fessors like to talk about is our history and the start of the founding today.”

As a future display place for the urn, Arnn said that the school is looking to build a store­house for its col­lection of arti­facts — including a col­lection of Winston Churchill’s letters, Sir Martin Gilbert’s papers, and a cross carved by artist Fred­erick Hart — in Hayden Park. Some of these arti­facts would, Arnn said, be on display in the Dow Hotel once the building is ren­o­vated.

“It was given to the school to be used as a visual teaching and com­mu­ni­ca­tions device so that the pro­fessors for years to come can use it to talk about the daily life and times back then of what people were doing,” Koch said. 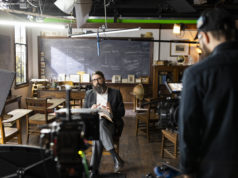 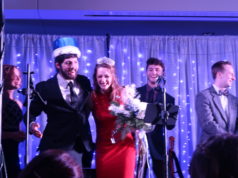 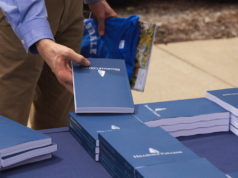