Every once in a while, I dis­appear to a place none of my friends have visited: Chile.

Twenty-five years ago my dad, an American man named Tim, started working as a mining engineer in Tucson, Arizona. One weekend, he decided to vacation in Prague, in the Czech Republic A Chilean woman — Rosario — who was running her own mar­keting company in Spain at the time, was also vaca­tioning in Prague that weekend. When my dad offered my mom a seat at an open-air jazz concert, she couldn’t resist. The rest was history — my history.

Growing up in a cross-cul­tural home has had a pivotal effect on my upbringing. But my story is only one of many at Hillsdale.

Freshman Emma Purdy’s mom is also from Chile, and her dad is American. She described growing up in a cross-cul­tural home as “a whole dif­ferent lifestyle.”

“At times, we laugh within my family that even though my dad grew up in Ply­mouth, Michigan, he has more ten­dencies that are His­panic than American,” Purdy said. “Some­times my dad will interject some­thing in a con­ver­sation that has a Spanish ring to it.”

But the mesh of cul­tures hasn’t always been easy. Purdy recalled times where her mom would suggest hosting large dinner parties at their home in Ann Arbor. At first, her dad would typ­i­cally say, “smaller is better.” But through the years, he’s accli­mated to the Chilean culture his wife has cul­ti­vated within their home. This accli­mation was an act of love, she said, and in some ways, sub­con­scious.

“My dad has assim­i­lated more to her culture and to her desires, more than she has had to assim­ilate to the culture here,” Purdy said. “He does see the beauty in Spanish culture, and he has been able to shift his pref­er­ences toward what she wants, and because of that, they have really developed a really great and healthy rela­tionship.”

But Purdy said she struggles with some aspects of Chilean culture. While in the United States fam­ilies are spread across the country, in Chile, no one lives more than 15 minutes from one another. Because of this, Purdy said Chileans have a ten­dency to go with the flow of their family instead of trying new things.

“He couldn’t believe that she was leaving every­thing,” Purdy said. “He knew she was going to have to adopt a whole new way of life.”

Though Chile is not a lux­u­rious country, having maids and chauf­feurs is normal, so laundry, cooking, and cleaning were all on the list of new things for her mom to learn.

But some tra­di­tions came to the United States with her.

“La Hora del Te” — or the hour of tea — cel­e­brates rest and good food. Around 4 p.m. every day, most Chileans sit down for tea, coffee, and an assortment of afternoon snacks. Purdy recalled enjoying the hour with her mom and sister every day.

“Every day after school, from preschool until I was a senior in high school, the three of us would sit down and have tea, and have pan con palta (bread and avocado), and cookies, and just talk about our day.”

Senior Genesis Rivera was born in a little village in south Mexico called Mapimi. But their family didn’t stay long.

“We lived in the middle of a desert,” Rivera recalled, “and when I was born, my lungs were very weak. I couldn’t even really go outside, because I wasn’t able to breathe, so we ended up moving to Kansas and later to Michigan.”

Upon arriving in the United States, Rivera says her parents were shocked by Amer­icans’ over­com­mitment to their work.

“Mex­icans are very family-cen­tered, and spending time with your family and your loved ones is most important to us,” Rivera said. “Here, everyone is focused on their career. I think they think that American’s should take the time to smell the roses every once in a while.”

Rivera said this is because the small vil­lages in Mexico demand a culture of depen­dence and everyone relies on and helps one another. For her, the sac­ri­fices of her family have instilled in her a deep respect for her loved ones.

“I call my mom every day, not for a sense of oblig­ation but because I want to talk to her every day. But some of my friends will call their parents once every two months or some­thing,” Rivera said. “I don’t think it’s a lack of respect, but we just have very dif­ferent ways of showing that respect.”

Their tra­di­tions carry out these values as well.

Dia de Los Reyes cel­e­brates the wise men’s arrival to baby Jesus. To cel­e­brate this, someone cooks a round loaf of bread in which three plastic babies — sym­bolic of Christ — are buried. The reward for whoever finds them? Cooking tamales for the next family gath­ering.

Rivera said though her childhood was dif­ferent than most other Hillsdale stu­dents, it doesn’t have to be dif­ficult.

“With any culture and being immersed within it, it doesn’t have to be com­pletely con­tra­dictory to American culture,” she said. “If you just stick to what you think is most important and those pri­or­ities and perhaps the char­ac­ter­istics and traits that you find you value most, you can still appre­ciate American culture and live an American life within it.”

Seven years had gone by until sophomore Steve Wei­deman realized that his parents were divorced.

In Albania, he said, hardly anyone gets divorced, so his mom con­tinued living in their home in Gross Point, MI, to cook, clean, and take care of the family until she remarried in 2011.

“She and my dad are still super tight,” Wei­deman said. “She lives right around the block, and she still comes over to cook and clean. He respects her, and he’s the reason she was able to come to America.”

Wei­deman grew up speaking only Albanian, so for a while, he and his dad didn’t speak the same lan­guage.

“Then my dad started taking me out to the movie theatre twice a week so I could learn some English, because my dad doesn’t speak Albanian,” Wei­deman said. “He couldn’t really talk to me, which he found kind of upsetting.”

While Wei­deman cel­e­brates less Albanian tra­di­tions here in the United States, he said his mom has still held onto some Albanian super­sti­tions.

“She doesn’t like it when you whistle at night,” he said. “She always yells at me and says it’s bad luck. Oh, and if you eat with two forks, you’re going to marry two wives.”

But the best lessons, Wei­deman said, have come from the high value Alba­nians place on quality of life. Growing up, Wei­deman said his mom would never buy him Lunch­ables or any “com­mer­cialized boxed foods.” Steaks and fresh salads kept him full. Even here at Hillsdale, Wei­deman says he has no problem driving half an hour to Cold­water for a good meal.

“I guess you could say I have expensive tastes, and I’m ter­rible with money,” he said, laughing.

Wei­deman added that main­taining this quality of life some­times means school comes second for him.

“I think that I value the quality of life more than work ethic some­times,” Wei­deman said. “If some­thing is really stressing you out and ruining your health or making your rela­tion­ships very depressed, I have no problem turning a project in late.”

Sophomore Vic­toria (Vika) Nunez was born in Moscow, Russia, and immi­grated to the United States with her Puerto Rican-American father and Russian mother.

Through growing up in Michigan, Nunez said she has found a new appre­ci­ation for freedom. Her dad cel­e­brates the American dream and is an ide­alist, Nunez said, and her mom has taught her to truly appre­ciate the freedoms she didn’t have growing up in Russia.

“My dad loves the story of America and its prin­ciples and that was some­thing he really likes to talk about to us,” Nunez said.  “But my mom bal­ances that out, and teaches us what it was like to live without that in a society. All that to say, I’ve learned how to laugh and cry simul­ta­ne­ously.”

Nunez said coming from a part-Puerto-Rican her­itage, some people expect her to be someone who is “always happy and playing their guitar on the streets and cha-cha-ing,” but this isn’t always the case. Nunez said she uses that joy to balance the hardship reflected in many Russian tra­di­tions.

One tra­dition is the typical Russian New Year’s cel­e­bration. While eating food for eight hours straight on Dec. 31, the Nunez family watches “Enjoy Your Bath,” a four-hour-long Russian film. This “topsy turvy” story ofNew Years Eve mishaps reflects the hard­ships of Russian culture, according to Nunez.

“I think my desire to see the beauty in stories that may not seem like they have happy endings is a Russian idea,” she said. “ If you just look at Russian history, it’s just one bad sit­u­ation after another one. I don’t think we should write it off, but I do think we try to see the good things, the redemption and renewal in every new season of life.”

It’s also a New Year’s tra­dition for everyone to take a bath, Nunez added. It’s a time to cleanse the hard­ships of the pre­vious year and enter the New Year “clean and fresh.” 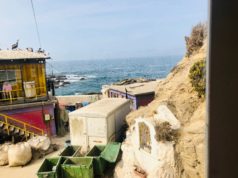 A Defense of running late: How Chile taught me to not be on time