With its antique brick and spanish-style roof, the Broad Street Manor opened its doors in Sep­tember to serve the many guests of Hillsdale after being sold to Linda Aardema and Brian McGregor.

The bed-and-breakfast was for­mally owned by Hillsdale College Chairman and Pro­fessor of Phi­losophy and Religion Thomas Burke and his wife, Eliz­abeth. They sold the house to Aardema and McGregor in December 2018. The manor offers guests three bed­rooms, each with their own bathroom, a living room, a formal dining room, a sunroom, and a bonus room with a large screen TV for movies.

“Moving has been a gradual process,” Aardema said “We still own the Royal Oak house, but every­thing we need is here on Broad Street.”

First Aardema closed her psy­chology practice in Birm­ingham, Michigan and they began to make many trips between their old home in Royal Oak and their new home in Hillsdale.

Since then, the two have made several upgrades to the Broad Street Manor, replacing toilets and com­pleting a welding project to make an antique bed into a queen-sized bed.

Aardema said she wants to maintain the original charm of the Civil War-era home so she didn’t do any painting, she kept the period-correct wall­paper, and pre­served the beau­tiful woodwork.

Director of Career Ser­vices Joanna Wiseley said she remembers vis­iting the house in the 1980s.

When the Burkes owned the house, they restored the woodwork to its rich auburn color.

On the outside of the house, Aardema and McGregor had an under­ground irri­gation system installed and they’ve added many fruit trees and flower beds.

Burke said he decided it was time to sell the house after living there for 25 years. When they lived there, they didn’t operate the house as a bed-and-breakfast.

“We had enjoyed it, ren­o­vated it com­pletely, added an attached garage, back-porch family room, and patio with a fire­place,” Burke said. “It was becoming dif­ficult to find people who would do repair and main­te­nance work, took a lot of work cleaning and gar­dening and cost to maintain, and was much larger than two people needed. You can only sit in one room at a time.”

The Broad Street Manor wel­comed its first guests in late Sep­tember for Hillsdale College’s first Center for Con­structive Alter­na­tives of the fall semester. Soon after, more guests came for the ded­i­cation of the college’s Christ Chapel in early October.

Aardema does most of the cooking and baking for the bed-and-breakfast. She said she thinks her oatmeal pan­cakes have been the favorite of guests so far.

“It’s a pancake that is made with oatmeal, whole wheat flour, but­termilk, and eggs,” Aardema said. “I tell people I’ll put some­thing good on top of it but it’s also very healthy and will give you enough protein to keep you until lunch. I saute brown sugar and butter and melt that and then add slices of banana. It’s like bananas flambe but without the alcohol.”

Aardema said she enjoys making dinners for her guests, one of the special ben­efits of staying at the Broad Street Manor. Recently she made a duck with orange sauce and cointreau.

“That was very special. I’ve maybe done 10 ducks in my whole life, and this one was the best,” she said. “I also made a great salmon with a dill and caper sauce. That was my favorite.”

Neither Aardema nor McGregor have been trained in hotel man­agement, but Aardema has won many baking con­tests and McGregor has studied with exec­utive chefs and is a som­melier. Having a bed-and-breakfast is a com­fortable and fun fit, as they enjoy cooking and enter­taining, Aardema said.

“We have lots of dinner parties and big parties for as many as 50 people where we lived in the past. It’d be in May through October, we’d typ­i­cally have outdoor parties,” Aardema said.

With her wel­coming smile and her passion for cooking, Aardema is ready to welcome more guests to her new bed-and-breakfast. The Broad Street Manor is located at 19 South Broad St. 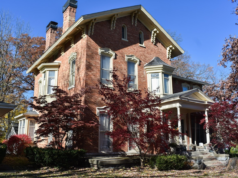 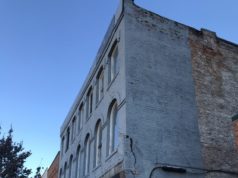 Condemned building to be demolished

Broad Street property will be demolished