The United Auto Workers’ strike from General Motors has impacted Michigan’s economy, and Hillsdale County is no stranger to its effects.

The strike has delayed, and in some cases, stopped the pro­duction of auto parts, affecting the busi­nesses of both auto part man­u­fac­turers and car deal­er­ships in Hillsdale County.

The Col­legian reached out to a rep­re­sen­tative of Mar­t­inrea Steel in Jonesville, Michigan, who said the strike has made an impact because GM is 40% of their business. They declined to comment further.

Owner of the Hillsdale Buick GMC Ken Joswiak said the main impact on their deal­ership has been the avail­ability of parts.

“We usually get our parts from General Motors,” Joswiak said. “We’re still receiving the majority of items, but some things are hard to get. There are certain parts we’re losing.”

The main problem, Joswiak said, is that GM is behind on shipping the deal­ership the parts they need to repair cars.

“What is now hap­pening is we’re expe­ri­encing a lot of delays,” Joswiak said.

“It may be a door panel or a corner panel, either way, the shipping is taking longer than usual. And we’re hearing the same story from others across town.”

Joswiak said that his deal­ership had an 80-day supply of cars when the strike began, so they have yet to have any issues with car inventory. If the strike con­tinues for another month, however, it will begin to sig­nif­i­cantly impact inventory.

“The longer the strike goes, we’re going to see more and more things affected,” Joswiak said. “As it goes on, nothing stays the same. It just gets worse and worse. I hope the strike ends this week.”

Zeke Adams, a sales con­sultant at the Frank Beck Chevrolet in Hillsdale, said the strike has not seemed to affect him yet, but he has talked to some GM employees still working who said it has made it harder on them. The employees that he talked to said they were not worried, however, and thought it was fair for the UAW members to go on strike.

According to a Wall Street Journal article by Kris Maher, the pro­longed strike will hit the economy of Michigan hardest because it has about 15 GM man­u­fac­turing facil­ities that employ tens of thou­sands of workers, which is more than any other state.

“Michigan relies far more on the auto­motive industry for wage and salary income than the U.S. as a whole,” Maher reported. “The sector accounts for 7% of such income, com­pared with less than 2% nationally, according to Moody’s Investors Service.”

The strike does not just affect the auto industry, it also impacts the restau­rants, shopping centers, and other busi­nesses near GM plants.

“Lost earnings to workers will result in lower sales-tax and income-tax rev­enues for the state, and some local busi­nesses near idled GM plants are already reporting lost sales,” Maher wrote.

According to Joswiak, there have already been some layoffs hap­pening in Hillsdale County. 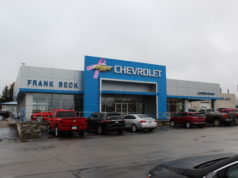 GM strike ends, employees catching up on back orders