The rhetoric department brought history to life on Wednesday morning with reen­act­ments of famous speeches from the indi­viduals com­morated by campus statues.

The speaking tour, entitled “His­torical Figures of the Liberty Walk: Speeches of Statesmen,” was part of the chapel ded­i­cation fes­tiv­ities.

Nearly 200 attendees lis­tened to stu­dents of Hillsdale College and Hillsdale Academy recite decla­ma­tions from the most famous speeches of the seven figures as well as present nar­rative back­grounds to the excerpts. The event was ini­tially planned as a walking tour, with the speeches delivered in the vicinity of the statues, but due to rain, the event was moved inside the gala tent.

Pro­fessor Kirsten Kiledal began working on the project last spring after she was approached by the director of the Four Pillars cam­paign, who pic­tured the event as being both a tour of campus and a walk-through of the Western tra­dition of states­manship for guests on campus for the gala.

“The­mat­i­cally, we want them to take away that these figures, in their own times and states­manship, had to deal with the four pillars that are central to this cam­paign — faith, freedom, learning, char­acter — and that we can see the way that is man­i­fested in their words and in their actions,” Kiledal said.

The event opened with a poetry prelude by Ned Wyse, husband of music pro­fessor Debbi Wyse, who is rec­og­nized for his talent in poetry recitation. He talked about and recited the works of Robert Frost and Will Car­leton, the purpose of which was to set a con­tem­plative and appre­ciative tone for the audience to receive the rest of the speeches.

The pre­sen­tation was divided into three cat­e­gories: Founding (both of America and the College), Civil War, and the 20th Century. Some of the ora­tions sampled included George Washington’s Farewell Address, Abraham Lincoln’s Second Inau­gural Address, Winston Churchill’s “We Shall Fight on the Beaches,” and Hillsdale College’s first Pres­ident Edmund Fairfield’s Cor­ner­stone Speech.

Junior Taryn Murphy was asked to be one of the student speakers because of her par­tic­i­pation in the Everett Oratory Com­pe­tition last year. She delivered Mar­garet Thatcher’s address on the passing of Ronald Reagan.

“It’s a really great way to be a part of a mean­ingful event on campus and to share with the friends of the college why Hillsdale means so much,” Murphy said. “I’m hoping that people get to see the rich history that Hillsdale cel­e­brates and that we still champion the values of those who came before us.”

Audience members were touched by what they saw.

“It was done with a lot of passion,” said Edward Drum, a President’s Club member vis­iting from Wash­ington.

Rita Drum, who is also a President’s Club member said, “Some of the moments in history I lived through, so to hear them come alive again was amazing.” 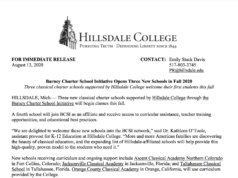