Hillsdale hob­byists gathered under the colonnade outside Mossey Library to peddle their wares at SAB’s first annual Makers Market. Most of the vendors were stu­dents selling goods baked, grilled, sewn, crafted, or grown.

Sorensen, dressed in tra­di­tional Greek garb, rep­re­sented the yia, or Greek grand­mother, for the group.

“I wear funny clothes like this, encourage people to eat things that are mildly unhealthy, and I did bring bread for everyone to eat, because it was my sour­dough starter’s first birthday,” Sorensen said. “Those are basi­cally all my duties as yia.”

A few tables down, past the homemade banana bread, candles, and retro ear­rings, seniors Madeleine Brylski and Adrianne Fogg brought their green thumbs together, offering a selection of baby suc­cu­lents, Snake plants, and Wan­dering Jew plants.

“I am having a blast,” Brylski said. “This is the time of my life. Adrianne and I just love plants so I am so excited to sell plants here today.”

The two heard about the Makers Market this summer and began planning and planting imme­di­ately. Brylski said that they both began breaking branches off of their larger Snake and Wan­dering Jew plants, which they then trans­ferred into small planters for pur­chase.

The pair also offered sumac tea, which they made simply by dipping a sumac branch into hot water.

Further down, the only non-student vendors, Mary and Ezra Bertakis and David Spence of Chef’s Way farm, offered stu­dents a selection of water­melon, cherry tomatoes, and an abun­dance of leafy greens.

The farm has another unique con­nection with the college. Ezra Bertakis’s uncle David Spence just retired from his cus­todial job at the sports center Sept. 20 after eight years of service. Spence said that when he heard about the Markers Market, he was delighted to have the oppor­tunity to come back.

“My great nephew heard about the market and I said ‘Let me come down. I can visit’,” Spence said. “Everyone meant so much to me here. This was my life. I want to come back and they let me come back here.”

Senior Avery Lacey also said she was thrilled that the Makers Market pro­vided her the oppor­tunity to share her fervor for fer­men­tation— of the tea variety.

Lacey and Rosemary Pynes ‘19  assembled and sold do-it-yourself kom­bucha starter kits, com­plete with instruc­tions and baby scoby — a yeast and bac­terial culture used to ferment tea — -all bundled together in a miniature ball jar.

“I thought it was a great event and hope they do it again,” Lacey said. “There were a lot of people who came by, who realized ‘Oh, I could make this,’ or ‘ I could make that.’ I think there could be a lot of oppor­tu­nities for next year.” 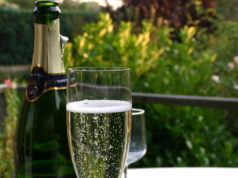 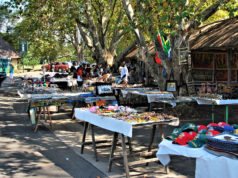