The empty lot at 23 and 25 N. Broad St., next to St. Anthony’s Catholic Church, is in the beginning stages of rede­vel­opment as the city searches for a developer to build on the spot.

“Once a com­munity is cer­tified, my team becomes engaged with the com­munity and works with them to identify some pri­or­ities sites that they would like to attract investment on,” Scramlin said. “The Broad Street parcel was one of the pri­ority prop­erties that they had iden­tified.”

Scramlin said he is working in con­junction with City Admin­is­trator Alan Beeker, who is also hard at work to get this project started.

As of now, Beeker said the lot has been cleared of the former, dilap­i­dated building, but a new building will not be con­structed anytime soon.

“We are probably a couple years out from seeing any actual con­struction,” Beeker said.

Scramlin said this project has the potential of trans­forming the look of downtown and presents an exciting oppor­tunity for the com­munity.

Scramlin said the City of Hillsdale under­stands this project will have a big impact on the res­i­dents and has asked them to respond with ideas for the site on a Facebook article posted on Oct. 2. Com­ments listing ideas for the property ranged from a YMCA to a homeless shelter.

Richard Murphy, project manager for the Michigan Municipal League, rec­og­nizes the impor­tance of the citizen’s input.

“It helps to have the people who are on the ground in downtown give us the per­ceptive in addition to the high-level data points,” Murphy said.

The city lis­tened to people’s opinions by hosting an open-house at the Hillsdale Com­munity Library on Oct. 9.

“We had about 15 people attend the meeting,” Murphy said. “There was def­i­nitely interest in first-floor use that is activity-gen­er­ating and brings foot-traffic downtown to help support the sur­rounding busi­nesses or brings employment downtown.”

More infor­mation should be available to the public on the project in the coming months.

“There will be another meeting in a couple months where our team brings back a few dif­ferent con­cepts for feedback in order to con­verge towards a final, pre­ferred concept,” Murphy said. 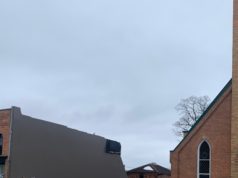