This Friday evening, eight campus men will don cos­tumes and entertain stu­dents with their humor and charm — all  for the benefit of children’s lit­eracy.

The ‘Mr. Hillsdale Pageant,’ which be held Nov. 1 at 7 p.m. in Markel Audi­torium, is sorority Pi Beta Phi’s largest phil­an­thropic event of the year.

Mr. Hillsdale has been an annual event known to the student body for as long as Pi Beta Phi Phil­an­thropy Chair Kristin Freeman or her advisor, a 2010 graduate of the college, can remember. The event, Freeman said, is not only Pi Phi’s largest but their longest-standing.

The reason for its per­pe­tuity, Freeman said, is because of its campus-wide diversity of par­tic­i­pants and audience members. Freeman reached out to sports teams, dorms, and Greek houses and invited them to nom­inate can­di­dates to compete.

All pro­ceeds go to the Pi Beta Phi Foun­dation, which allo­cates the majority of funds to lit­eracy ini­tia­tives. Last year, they raised a little over $1,800. In years past, Freeman said, ‘Mr. Hillsdale’ typ­i­cally raised a little less than that. In terms of fundraising, Freeman said last year stood out –around 300 people attended. Freeman is pro­jecting the same this year.

Although most recent com­pe­ti­tions have included a costume contest, Freeman said she is restoring some por­tions of the event to their former glory for a change of pace. Freeman said she was looking for some­thing refreshing, espe­cially since so many stu­dents come year after year. She likened the new style to a Miss America pageant as it includes a swimsuit portion. During the swimsuit portion, par­tic­i­pants will share their favorite pickup line. The pageant will still include the formal wear com­pe­tition where par­tic­i­pants answer a question as well as  the talent com­pe­tition.

Freeman said the show is always fresh because con­tes­tants make the show their own depending on their indi­vidual talents and per­son­al­ities.

Siegfried said he became a con­testant to support Pi Beta Phi’s phil­an­thropy, “Read > Lead > Achieve.” He expects people will come out to see him and the other con­tes­tants entertain, none of the ways of which he was willing to reveal.

“It’s a great way to bring people together for some­thing fun,” he said. “Everyone needs some­thing to laugh at, espe­cially here.”

Freeman is busy planning the event with the help of her sisters, including hosts junior Lauren Peterson and senior Alyssa Viola. Peterson said it was their humor that got the two of them their spots as emcees, which is fitting as she plans to use her role to poke fun at the con­tes­tants.

“We’re friends with Kristin and she thought we would do a funny job,” Peterson said.

Tickets are on sale through Friday, Nov. 1 for $4 in the Grewcock Union and will be on sale for $6 at the door. 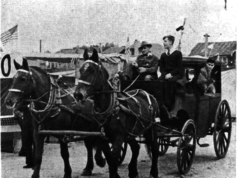