The cheapest ticket to see Post Malone on his Runaway Tour in Detroit cost a stag­gering $170. The highly antic­i­pated tour comes after the release of his third studio album, “Hollywood’s Bleeding,” in Sep­tember.

Post Malone entered the rap scene in 2015 at the age of 20 with the overnight success of his song “White Iverson.” The track racked up a million listens in a month and led to col­lab­o­ra­tions with rappers Kanye West and 50 Cent. He made his mark with his first full album, “Stoney,” in 2016. His unique style has led him to perform in sold-out arenas across the globe and to col­lab­orate with Aero­smith at the 2018 Video Music Awards.

The album had the fifth-largest streaming debut week in Bill­board history and cur­rently sits at number one on the Hot 200 for the third week in a row.

The 17-track album fea­tures raw and emo­tional lyrics, and wel­comes fans into the hard­ships of fame.

Malone recently moved away from Los Angeles to Utah, saying he didn’t like the Hol­lywood culture.

“I feel like, in L.A. and Hol­lywood, there’s such a strange vibe to where it just feels like there’s a lot of vam­pires out there that just want to suck the life from you,” Malone said in an interview with Spotify. “You gotta get out and take a step back and look at the whole sit­u­ation and you realize that Hol­lywood itself is kind of dying in itself because of all of the blood-sucking vam­pires.”

The opening track shares its name with the album and sets the mood for the ensuing tracks. It paints the dif­fi­culties of living in Hol­lywood.

“We’re running out of reasons, but we can’t let go/Yeah, Hol­lywood is bleeding, but we call it home.”

A little later in the album, “A Thousand Bad Times” hits on the dif­fi­culties of finding real rela­tion­ships in the celebrity world. Malone com­ments on the lack of sin­cerity in how women treat him. He sug­gests that the feeling of being used doesn’t affect him anymore, because he’s so used to insin­cerity.

“It’s gonna take a lot more to kill me/So thank you for the grave/I needed me a place to sleep,” he sings.

One of the best beats on the album is “Circles,” a track in which Malone con­tinues to explore his rela­tionship struggles. Now, Malone taps into the classic love-gone-cold nar­rative as he sings about how he and his girl­friend keep doing the same things without any change.

“Seasons change and our love went cold/Feed the flame cause we can’t let go/Run away, but we’re running in circles,” Malone sings.

“Die for Me” has a star-studded lineup — including Future and Halsey — but not only are Malone’s romantic rela­tion­ships suf­fering, he also can’t seem to find genuine friend­ships.

“Said you’d take a bullet, told me you would die for me/I had a really bad feeling you’d been lying to me,” the lyrics read.

His reaction to these feelings plays out in track 10, “I’m Gonna Be.”

“Some people think I’m livin’ wrong/We live this life but not for long.”

Malone has an obsession with artists who died young and has tattoos of many including Elvis, Kurt Cobain, John Lennon, and Stevie Ray Vaughan.

With all his struggles, Malone seems to find some solu­tions later in the album. The shortest song on the album, “Internet,” is a reaction to the fak­eness and addiction involved with social media.

“Well if igno­rance is bliss, then don’t wake me up/And I’ll prolly be the last to know/Cause I don’t get on the internet no more,” Malone says.

Throughout “Hollywood’s Bleeding,” Malone struggles with the famous life. Not all of it is sad; “Wow” takes the lis­tener into the flashy party lifestyle and in “Saint-Tropez” Malone flexes his wealth.

“The roof go down when I hit switch/ I mon­eyball like Bradley Pitt,” Malone raps.

However, the overall album shines a light on the not-so-glam­orous celebrity lifestyle. With addictive beats, catchy cho­ruses, and real lyrics, Post Malone knocks it out of the park — and into the realm of serious reflection — with “Hollywood’s Bleeding.” 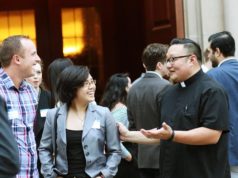 Alum in Hollywood shares how she uses her Hillsdale education