Now, after a solid year of tweeting at Outback Steak­house, Sievers has clinched the role and will be on the side­lines at the game.

The idea was born on January 1, 2019 when Sievers was watching his favorite hand-carved, golden, ready-to-dip appe­tizer jumping and dancing on the side­lines of a major college football game.

“I remember it like it was yes­terday,” Sievers said. “The Iowa Hawkeyes were taking on the Mis­sis­sippi State Bulldogs in an exciting Outback Bowl, as they always are. I looked up from my phone and my eyes were graced with the most glo­rious mascot in all of sports: the Bloomin’ Onion. It was love at first sight. I imme­di­ately turned to my mom and said, ‘Mom, I want to be that guy.’”

The excitement. The joy. The exhil­a­ration. The sen­sation. Sievers was cap­tured by the onion’s radiant petals and he was not going to stop working, striving, and fighting until he achieved the ultimate status of the Bloomin’ Onion.

Sievers knew what he had to do. Pulling out his smart­phone and opening his Twitter feed, he began to draft the first of what would become hun­dreds of mes­sages to Outback Steak­house.

“My first tweet to Outback was very simple: ‘My only goal for this year is to be dressed up as the Bloomin’ Onion on the sideline at the next Outback Bowl. @Outback how can we make this happen?’ When I started to take it seri­ously after a couple of weeks, I would take more time crafting the spiciest memes the internet has ever seen.”

Sievers under­stood that while 80% of all New Year’s res­o­lu­tions fail within the first month, he was not going to give in and sac­rifice his ultimate dream for a higher test score or an extra hour of sleep. He knew being crowned the Bloomin’ Onion would require hard work, ded­i­cation, and daily sac­rifice.

“Hypo­thet­i­cally, if I was up late on a Sat­urday night studying or doing some­thing that a good Hills­dalian would do, I would forego making a meme and just keep the message simple, letting Outback know that I love them and that I was waiting,” Sievers said. “Other nights, when I was pur­posely avoiding my respon­si­bil­ities, I would bust out Pho­toshop and make some­thing extremely extrav­agant. You could probably tell how pro­ductive I was the pre­vious night based on the intricacy of my tweet at Outback.”

“Outback DMd me on Twitter in July and said that they wanted to talk to me,” Sievers said. “I’m guessing that was just a part of the vetting process and to make sure that I wasn’t going to be a bad rep­re­sen­tation of the Outback brand. They left every­thing pretty open-ended until Sep­tember, when they announced that if I made a video that got 10,000 retweets I could be the mascot.”

Sievers began the retweet chal­lenge by making a video that explained his year-long quest. The video received over 270,000 views and mul­tiple celebrity retweets, including one from Fox News per­son­ality and 2010 Hillsdale graduate Kat Timpf.

At 7,239 retweets Outback Steak­house chose to end the chal­lenge and crown Sievers as the 2020 Bloomin’ Onion.

“Even though I didn’t get 10,000 retweets, they reached the correct con­clusion that my passion is enough to overcome whatever amount of engagement they were hoping to get from my cam­paign.”

Since being crowned the Bloomin’ Onion, Sievers has been fea­tured on local news sta­tions and radio shows.

“That was the first time I had ever been on live tele­vision which was really cool,” Sievers said. “I got to see the newsroom and the green screen and I met the leg­endary West Michigan mete­o­rol­ogist Bill Steffen. I thought it was funny how seri­ously everyone in the newsroom treated my story because it started off com­pletely as a joke.”

Be sure to tune-in this New Year’s to watch Hillsdale’s Jake Sievers shake those petals at the 2020 Outback Bowl. 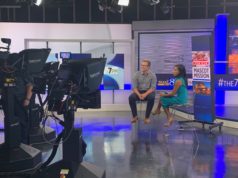 From Barstool to the Bloomin’ Onion: how one Hillsdale student used twitter to reach his dreams