Res­i­dents in the City of Hillsdale are required to put leaves and brush in bags for pick-up by Modern Waste Ser­vices this fall. The city released a notice in Sep­tember out­lining the new pro­cedure for leaf pick-up stating that there would be two pickup dates on Oct. 26 and Dec. 14.

The city will still be picking up cut branches less than 8 feet in length on the same dates as when they’ll pick up the brush. Res­i­dents will also be allowed to haul their brush to the compost site on Water­works Avenue Monday through Friday from 7 a.m. to 3 p.m. The city will not be picking up dirt, large stumps, or stones.

“Modern Waste offered a price to pick up leaves of  $19,500 annually,” Director of the Department of Public Ser­vices Jake Hammel said. “The process uti­lizing bags is the only method they can offer.”

While the new method for pickup may be more work for res­i­dents, Hammel said it is the only pos­sible way to com­plete the task in the short amount of time the city has.

“Modern Waste uti­lizes all of the garbage trucks they have available to them in order to quickly pick up all of the leaves on a Sat­urday,” Hammel said. “The garbage trucks have to run regular garbage col­lection Monday through Friday, so bagging leaves is the only way to make it pos­sible to get it all done in a single day.”

Before Hillsdale switched to Modern Waste Systems, leaves could be left in piles near the street where they would be picked up.

Mayor Adam Stockford said the money saved with the new policy has led to a lot of improve­ments within city lines.

“The leaf policy was changed for two main reasons,” Stockford said. “First, we’re trying to find ways to get more out of our budget for street work, and pri­va­tizing leaf pickup was a way to save the cit­izens $50,000 a year in expenses, as well as give our public ser­vices more time to work on our streets. As a result of cuts like this, we were able to fix 13 miles of street this past summer. That’s over a quarter of our total local streets.”

Stockford met with Hillsdale College Asso­ciate Dean of Men Jeffery Rogers prior to releasing the news of the new reg­u­la­tions in an effort to get the college involved in the leaf pickup efforts.

“Chief and I have had con­ver­sa­tions about a leaf pick-up contest,” Stockford said. “Unfor­tu­nately, though not the fault of Chief, it’s been dif­ficult to get all the people in the same room to further our con­ver­sation about it and the clock is ticking.”

Scott Lowery, a senior at Hillsdale College and a member of the football team, heard of the potential leaf-pickup com­pe­tition around the city and said he would be delighted to take part in it.

“Me and some guys from Gal­loway used to shovel snow from dri­veways for people that needed help,” Lowery said. “We had a great time. I think picking up leaves for people would be just as fun and be a big help.”

While there is a case to be made against the changes when it comes to the high cost of the bags required by the city, the decision made the process easier for Modern Waste employees, saved the city money, and allowed for a solution to a bigger problem.

“We can look at pro­viding the bags to the cit­izens,” Stockford said. “I would def­i­nitely be open to that con­ver­sation, although it would likely evap­orate much of the savings we’ve created through pri­va­tizing.”

Any ques­tions regarding the new policy can be directed to the Hillsdale Department of Public Ser­vices. 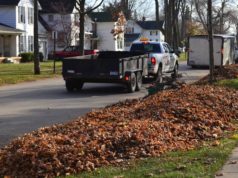