Bon Appetit’s lunchtime project “Weigh the Waste” showed Hillsdale College stu­dents and guests just how much food they waste: 418 pounds over the course of five lunch periods, to be exact. That  cor­re­sponds to 334 meals.

Bon Appetit Mar­keting Coor­di­nator William Persson said Bon Appetit runs this project across all of its accounts around the country in both the cor­porate and higher edu­cation set­tings. Persson added that the driving force behind the project was a recent study Bon Appetit com­pleted by part­nering with the National Resource Defense Council. The project was titled, “Toward Cleaner Plates: a Study of Plate Waste and Food Service.”

“This was a study that was sci­en­tif­i­cally-formed, so it’s a little more exact than what we’re doing here,” Persson said. “They’re getting data over a long period of time in both the edu­ca­tional and cor­porate set­tings to figure out what’s causing people to waste food from their plates, how much it is  for each guest, and what are the best ways to reduce it.”

The study looked at 20 accounts, both cor­porate and higher edu­cation, over a variety of meal periods and found that college stu­dents waste 112 pounds of edible plant waste per student per school year. This number adds up to around 2.18 ounces of waste per meal per student.

Senior Jessica Frenkel started the “Roots Project” this summer and was hired as the Special Projects Coor­di­nator for Bon Appetit. Frenkel, who said she sup­ports projects focused on sus­tain­ability, took her Roots Project and col­lab­o­rated with Bon Appetit for Weigh the Waste.  “The number that we’ve racked up is quite shocking, espe­cially for a small campus,” Frenkel said. “It’s dis­cour­aging to see that is what we’re wasting, there’s no doubt that that’s dis­ap­pointing. But also, to be able to see that number and under­stand the scope of the issue is helpful to rein­force that awareness.”

Junior Danielle Lee helped Bon Appetit with Weigh the Waste and said most stu­dents she talked to appre­ciated the project because it increased their awareness about food waste.

“When you’re behind the table and looking down at this bin full of food, you see whole hot dogs, a ham­burger that has one bite, or full patties, and you’re just like: ‘Wow, that could feed somebody else who actually needs food,’” Lee said.

To combat this waste, Persson said Bon Appetit is looking to implement tasting spoons at some point in the future. Tasting spoons can reduce plate waste by up to half, according to a Bon Appetit study.

“We have it ready,” Persson said. “The company didn’t develop col­lateral yet, but I went ahead and requested it in advance, so we got our own stuff designed because we wanted to do it earlier.”

Frenkel said tasting spoons will help stu­dents develop a more informed decision about what they’d like to eat.

“Feedback is wel­comed in a really great way with Bon Appetit, but as a busy student, you need to eat whatever they’re serving,” Frenkel said. “And to be able to choose in a more edu­cated way, having tasted dif­ferent things and decided what you want, I think there’s a lot of benefit to that.”

Since starting the Roots Project, Frenkel said she has been most impressed by Bon Appetit’s com­mitment to sus­tain­ability.

“They’re really active in pushing toward sus­tainable prac­tices, ethical farming, and locally-sourced ingre­dients,” Frenkel said. “All of those things that you hear about as buzz­words, for Bon Appetit, they’re more than buzz­words. At least from what I’ve seen, it gen­uinely is what their goal is.” 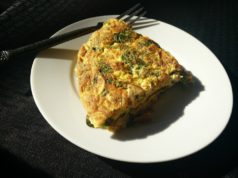