Stu­dents, faculty, staff, and com­munity members gathered in front of Central Hall on Wednesday at noon for a 9/11 memorial cer­emony orga­nized by Hillsdale’s Young Amer­icans for Freedom.

Junior Carl Miller, pres­ident of Hillsdale’s YAF chapter, wel­comed the crowd, saying the anniversary of 9/11 is a solemn occasion but also “a day of grat­itude to fire­fighters, law enforcement, and service members, and a day of grat­itude to God for his ines­timable blessings and gift of Jesus Christ.”

Onlookers bowed their heads as Rob Stewart, senior pastor of Coun­tryside Bible Church, com­menced the cer­emony with prayer. He thanked God for his blessings and asked him to help us remember his con­stant love through the changing cir­cum­stances of our world.

“So wave your flag,/And show your pride and never let it fall;/And remember why we pledge each day/‘With liberty and justice for all,’” they said during the last stanza.

Guest speaker Scott Hephner, Hillsdale’s fire and police chief, then shared with the audience his mem­ories from the day of the ter­rorist attacks and his per­spective on their impli­ca­tions. He said that on that day, 18 years ago, law enforcement members, fire fighters, and civilians alike demon­strated extra­or­dinary bravery, and we must honor their sacrifices.

Hephner praised the pas­sengers on Flight 93 and the civilians who ran to the Twin Towers and the Pen­tagon after they were hit to help in any way they could.

“Nobody had to ask them,” he said. “They just did this out of com­mitment to public service.”

Hephner was touched by the people of Hillsdale’s response to the attacks, recalling that, shortly after the attacks, com­munity members came to the police department to offer assistance.

“Just having that knowledge that people are willing to commit to serving no matter the end shows that anyone can step up. Because that was shown to us that day, we know it will happen in the future,” he said.

After Hephner’s address, Teacher of Music Christopher McCourry played “Taps” from the outdoor landing of Central Hall while the audience turned to face the flagpole. Wearing their dress uni­forms, vet­erans saluted the flag, which was flying at half-mast.

College Chaplain Adam Rick called for a moment of silence to remember the victims of the 9/11 ter­rorist attacks and offered a closing prayer.

“Having a local — someone from the com­munity — brought it closer to home,” he said. “It was a very solemn cer­emony. You could feel everyone uniting on this day for a higher purpose.”

Marine Corps veteran Don Denning remembers learning of the attacks from his office in Mass­a­chu­setts. He said the service was the perfect oppor­tunity to com­mem­orate 9/11 victims.

“It was very pleasant,” he said. “A nice way to honor those who gave all.”

Miller said the memorial cer­emony has become a reminder to everyone on campus of the memory and meaning of 9/11.

“It’s not only important that we remember the attacks, but also that we make a con­certed effort to come together and honor those who sac­ri­ficed so much to give us the freedoms we enjoy today,” he said. 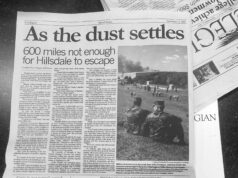 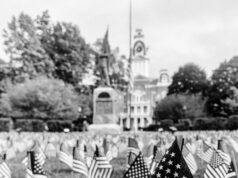 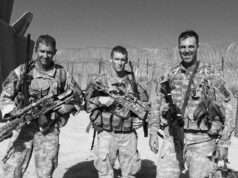