Ryan Murphy ’19 was just 7 years old when she started her first business, and she hasn’t looked back since.

Since grad­u­ation, Murphy has been hard at work on her newest business, Schol­arship Nav­i­gator, where she offers con­sul­ta­tions to help college stu­dents locate and apply for schol­ar­ships. This business is her latest in a long line that began with oranges.

“I just taught myself to make orange mar­malade,” Murphy said. “Sur­pris­ingly, it turned out good, and I started selling it to family members and friends.”

While at Hillsdale, she studied pol­itics and even went on the Wash­ington-Hillsdale Internship Program, or WHIP. But Murphy said she has always been inter­ested in entre­pre­neurship, and that’s what brought her back to Schol­arship Nav­i­gator.

Murphy’s story, however, begins long before Schol­arship Nav­i­gator was even con­ceived. In high school, mostly during her sophomore year, Murphy thought of putting the public speaking skills she learned through par­tic­i­pating in debate to good use. She gained an interest in public speaking and wanted to promote her con­ser­v­ative political values as well.

“I thought, ‘why not become a public speaker in my com­munity?’” she said. “I could be a resource, someone knowl­edgeable on certain topics.” So, Murphy started Ryan Kelly Speaks.

Murphy toured her com­munity to speak on many dif­ferent topics, often political. She spoke to rotary clubs, con­ser­v­ative cam­paigns, and often shared stages with com­munity leaders. This expe­rience led her to con­ceive of business as she does today.

Murphy offered a dif­ferent view of entre­pre­neurship than the classic busi­nessman trying to earn as much money as pos­sible. “If I wanted to make money straight out of college, I would not be an entre­preneur right now,” she laughed. “With the age of the internet, entre­pre­neurship is changing. There are so many oppor­tu­nities now for people to share their talents to improve other peoples’ lives.”

To Murphy, entre­pre­neurship means some­thing much deeper than money-making. It was a chance to serve her com­munity with her knowledge and skills — be it mar­malade, public speaking, clothing acces­sories, or finding schol­ar­ships. With that in mind, she thought about how she could best serve her com­munity.

Before and during college, Murphy worked hard to secure enough schol­arship money to cover her entire under­graduate edu­cation, so she knew how to maneuver around the schol­arship world. It was only a matter of time before she put the idea together: she could serve people by helping them find lucrative schol­ar­ships and avoid thou­sands of dollars of debt.

“For those on the outside looking in, it can seem like, ‘well, they must be doing it for the money.’ But often the opposite is true,” Murphy said. “They’re doing it first and foremost because they love it and they want to share what they love and what talents they’ve been given to improve the lives of other people in a tan­gible way.”

But it’s not all fun and games for Murphy either. To live out her dreams of com­munity service, there’s a lot of work involved. Earlier this year, while still in school, Murphy taught herself how to build a website on top of being a full-time student with a part-time job.

“You’re CEO, you’re social media coor­di­nator, you’re the sales rep­re­sen­tative. You’re every­thing all in one,” Murphy said. “That’s been the biggest chal­lenge for me. How do I do all these things effi­ciently and stay orga­nized and stay moti­vated? Some­times it can feel incredibly over­whelming.”

Some­times, Murphy explained, you won’t see imme­diate success with your business. Entre­pre­neuri­alism requires hours of work that often don’t have tan­gible rewards in a short amount of time.

“But I just remind myself, ‘Okay. What’s the end goal?’ It’s to take my gifts and help other people,” Murphy said.

Everyone is the entre­preneur of their own life, Murphy said. It makes sense to take your expe­rience, skills, and passion and leverage them in a way that you can help others, she added.

Murphy encouraged anyone who has an idea to better their com­munity to take a shot. Don’t get dis­couraged if you don’t see imme­diate results, she said, and think of it as a “way to let cre­ativity flow.”

In the end, Murphy believes she and others will be suc­cessful entre­pre­neurs if they keep sight of their goals of service and com­munity support.

“Some people may see entre­pre­neuri­alism as a self-cen­tered activity, but it’s every­thing but that,” Murphy said. “Every­thing is others-focused and that’s what I love about it.” 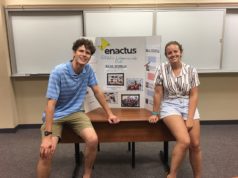 Entrepreneurship club back in action 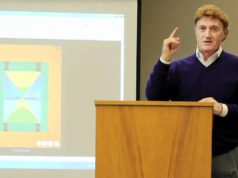 Tocco to speak on Monday 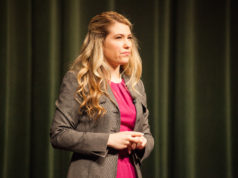 Juniors elect their class of 2019 officers