Just three weeks into the school year, the Student Fed­er­ation is now oper­ating with an unex­pected, large surplus of funds worth more than $40,000, in addition to its regular budget.

Over the summer, admin­is­trators reviewing the Student Fed account dis­covered extra funds, the result of an emer­gency fund that was left untouched for several years. Each semester, the fed­er­ation stored $5,000 in an emer­gency fund, which totaled about $41,000. That emer­gency fund, according to Student Fed­er­ation Pres­ident James Millius, would ideally only hold between $10,000 and $15,000 dollars at any given time. The surplus added about $31,000 of usable, dis­cre­tionary funds to Student Fed’s budget for this school year, as $10,000 had to remain in the emer­gency fund. This is in addition to the $15,607 that was already bud­geted for dis­cre­tionary funds each semester, bringing the total amount of money available for dis­pen­sation to clubs and student groups throughout the year to more than $62,000, twice the typical amount the fed­er­ation can spend each school year. The money that con­sti­tutes Student Fed’s budget comes from student fees.

“Func­tionally, we have about $31,000 that can be put toward dis­cre­tionary funds over the next several semesters as we see fit,” Millius said at the beginning of the Federation’s Sept. 12 meeting. “A rec­om­men­dation was made by Dean of Women Diane Philipp, to — as a show of good faith to the college’s pub­li­ca­tions — con­sider rein­stating some of the funding that we did not give them.”

In its meeting last Thursday, the fed­er­ation opposed that rec­om­men­dation when it failed to pass a motion trans­ferring $5,000 to the Tower Light budget. This motion would have repaired the publication’s down­sized budget that the Fed­er­ation approved last spring.

When con­ducting the annual budget approval last spring, the federation’s pub­li­ca­tions com­mittee raised con­cerns about the $11,000 allotted annually to the Tower Light, Hillsdale’s student-run lit­erary journal. According to Maria Servold, faculty adviser to student pub­li­ca­tions, Tower Light’s budget has been the same for at least eight years and has often been chal­lenged, but never changed, by pre­vious Fed­er­ation members

Even though the reduced Tower Light budget was approved in April, Servold said the dis­covery of the large surplus changes the con­ver­sation about the federation’s funding this year.

“The fact that they’ve uncovered an extra $31,000 and still refuse to give the Tower Light any of it shows that they are not driven by a desire to support student orga­ni­za­tions — as is their mission — but by some sort of mis­guided ‘prin­ciple,’” she said. “Rather than using a surplus to help make a pub­li­cation better, they’d rather cling to those pennies to make a point.”

The fed­er­ation pub­li­ca­tions com­mittee con­ducted an informal poll last spring to get a sense of the Tower Light’s read­ership among stu­dents, and found that only 12% of those sur­veyed reported reading the journal, with a margin of error of 4%. Servold and Tower Light Editor-in-Chief Mary Kate Boyle dispute this figure, as they contend that the poll was unsci­en­tific and no one involved in the Tower Light was con­sulted in cre­ating the poll.

Based on this figure, the pub­li­ca­tions com­mittee con­cluded that the printing cost of $6 to $7 a piece for the Tower Light was unnec­essary, and that it should be printed in-house for less than half the cost. The new budget would contain allot­ments for a new website and stipends for the edi­torial board, but the Tower Light would have to increase out­reach and its presence on campus. Based on this rec­om­men­dation, the fed­er­ation finance com­mittee cut the Tower Light’s budget by $5,000.

“Basi­cally everyone at the college in a position of authority says we shouldn’t print that way because it won’t look pro­fes­sional, and it’s important for us to rep­resent the college well,” Boyle said.

“Spending less money on a product does not auto­mat­i­cally make it a better product,” she said.

The motion to rein­state the Tower Light’s budget was an unorthodox sit­u­ation, first in that it involved amending a budget that had been approved in the spring, and second in that it did not proceed through normal com­mittee channels.

Despite its irreg­u­larity, Millius assured the body that it was within the rules and that an exception was made in this case because of the approaching dead­lines for the fall edition of the Tower Light.

Rep­re­sen­ta­tives Matthew Mont­gomery and Braden VanDyke, chairman of the Pub­li­ca­tions Com­mittee, spoke against the motion.

“If we truly have an interest in the student body in mind, we should allocate these extra fees to clubs and orga­ni­za­tions, rather than extend an olive branch to a group that feels it was maligned by a right decision by the Pub­li­ca­tions Com­mittee,” Mont­gomery said during the meeting.

VanDyke out­lined several reasons as to why he felt the motion should not pass, including that, to him, the dif­fer­ences in printing quality were “neg­li­gible and imper­cep­tible to the naked eye and the average reader,” and that the Tower Light had not yet tried to operate under the new budget.

“We crafted and passed the budget last semester on prin­ciple,” VanDyke said. “It is our job as rep­re­sen­ta­tives on the Student Fed­er­ation to judge the best use of a dollar and to rep­resent everyone’s dollars and interests.”

There were no state­ments in support of the motion, and it was struck down in an 11 – 2 vote with VanDyke abstaining.

According to Boyle and Servold, no one from the Tower Light was made aware that the vote was on the agenda, and therefore, they were not able to speak in support of the motion.

“This is a really frus­trating position to be in because I am here to make this a quality pub­li­cation,” Boyle said. “I am trying to make it better than it has been before, while also having half my budget taken away.”

Boyle has already made efforts to follow the federation’s instruc­tions to increase campus engagement with the Tower Light, which has resulted in increased sub­mis­sions.

“Basi­cally, we’ve held up our end of the bargain,” Boyle said. “We’ve done every­thing we can to improve our out­reach and pub­licity, and when that measure came before Student Fed again, we didn’t know it was hap­pening.”

The Sept. 12 meeting con­cluded with a request by Chi Omega rep­re­sen­tative Katie Ryerson that each member be pro­vided with a detailed account of fed­er­ation finances, a motion that can only be made by the trea­surer and is limited as to how much the rep­re­sen­ta­tives can see. It was the start of what will be an ongoing dis­cussion about what can be done with the $31,000 surplus, which, as of yet, has not been touched. 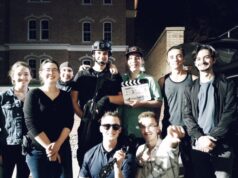 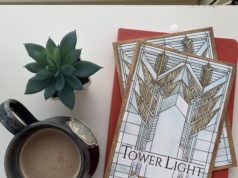