Friday nights at Rough Draft are about coffee, con­ver­sation, and if you’re lucky, live music. This past Friday stu­dents and locals enjoyed the music of indie folk singer Two-Faced Wilson, a solo artist on a “mini tour” around the Midwest.

From 8 to 10 p.m. Two-Faced Wilson per­formed original songs and various covers while cus­tomers worked on homework, chatted with friends, and played board games. In between songs, he engaged with the audience and answered their ques­tions.

“I loved his chill vibes,” Kelsey Lantis ’17 said. “I was still able to do homework while also being engaged with his music. His original music was really cool and calming, perfect to listen to on a Friday night.”

Two-Faced Wilson is the solo project of singer Adam Droscha. A native of Char­lotte, Michigan, Droscha describes his music as “Americana/indie folk-rock and riff-driven blues rock ‘n’ roll mixed with British pop rock.” He said he writes songs inspired by the Midwest, and about beauty in the ordinary things.

After several years of leading both secular and church bands, Droscha chose to tran­sition into solo music per­for­mances in 2014.

“I’ve always enjoyed music,” Droscha said. “As soon as I could play a chord I started writing my own songs.”

Droscha described how his music is influ­enced by his Mid­western roots.

“My inspi­ration for my songs are everyday moments, everyday things that speak to bigger things. I like to make stories connect. I like remem­bering where I came from,” Droscha said.

“Live coffee shop music is really big in my hometown, so I felt very at home lis­tening to his music,” Jordan said.

In his spare time, Droscha works as a free­lance writer and reporter, but hopes to tran­sition into more Christian-based media in the future. In the meantime, his “Midwest Mini Tour” stops include Michigan, Wis­consin, and Indiana over the next few days.

“Why do you call yourself Two-Faced Wilson?” Senior Jillian Reigle ‘20 asked, as Droscha was closing out his set at the end of the night.

“Everybody always asks that,” Droscha said. “Hon­estly it’s just easier to spell than my last name.” 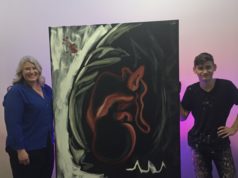 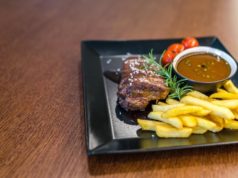