Imagine posting content for mil­lions of judging eyes to see. That is just a small part of what Ric Tombelli does every day.

Tombelli is the new director of digital mar­keting at Hillsdale, and despite having worked here only a few short months, he and his team have been hard at work making sure the college’s brand stays strong and con­sistent.

The school hired Tombelli in July, and six years of owning his own company proved itself valuable expe­rience as he took over the many com­pli­cated facets involved in running Hillsdale’s digital marekting. One of those main facets is man­aging all of the social media channels that rep­resent the college, a part of his job that he has empha­sized. It carries a lot more weight than it does for the average college student, espe­cially with the recent issues of free speech faced by many major social media plat­forms.

“In theory,” Tombelli said, “things that we speak about here at the college that are con­sidered the bedrock of what we teach could be viewed by some of those plat­forms as speech that they no longer wish to promote.”

This would be a step in the wrong direction for the college as a whole, he said, as social media plays a large role in con­necting with Hillsdale’s inter­na­tional audi­ences.

Though digital mar­keting may seem to be a rel­a­tively straight­forward job, there is a great deal of time and effort put in to making sure that the school’s brand is pro­moted in a con­sistent, pos­itive manner.

“There’s the Hillsdale.edu site,” Tombelli said, “but there’s also the Halter Shooting Center, there’s the online courses page, and Hillsdale in D.C. So my job is to make sure that those  prop­erties reflect the brand of the school.”

Bryan Springer, another of the school’s new addi­tions to the mar­keting department, helps to ensure that Hillsdale’s values are accu­rately rep­re­sented, both online and in print.

“One of the fun­da­mental keys to mar­keting is con­sis­tency,” Springer said. “Con­sis­tency is important to build brand equity that people are used to seeing in a certain way.”

After teaching for more than ten years in Hillsdale’s art department, Springer now works as the mar­keting department’s cre­ative director.

“We’re looking at devel­oping an identity that’s dis­tinctive, yet still ‘Hillsdale,’” Springer said, “so that we can provide engaging com­mu­ni­ca­tions to a variety of dif­ferent audi­ences.”

One of those audi­ences is the admis­sions department, which Springer said is one of their main avenues for bringing in new stu­dents to the college.

“We have Facebook and YouTube cam­paigns that we’ll put up, make them into YouTube ads and Facebook ads, and that kind of thing,” said Chandler Ryd, a video pro­ducer in the mar­keting department. “The college is very com­mitted to doing video and doing it on a really big scale; [they are] high quality pro­duc­tions.”

These videos serve a wide variety of pur­poses from pro­moting the college to filming the college’s large selection of online courses. Ryd is on scene throughout the filming process, assisting with any­thing needed to com­plete pro­duction.

“The goal is to teach people about what the school is and what our mission is,” he said.

Tombelli has so far enjoyed his time leading the mar­keting for a school as special as Hillsdale, he said. Tombelli said he is excited for his position with the department to showcase a college as uniquely driven as Hillsdale to the rest of the world.

“Hillsdale is a lot like the Silicon Valley of col­leges because we do things nobody else does,” he said. 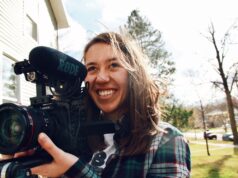 The girl who could: Hillsdale student is a jack of all trades