With a dry-erase bartop, tables that used to be windows, and paintings from local artists on the walls, the new Ram­shackle Brewing Company in Jonesville that opened July 17, has a col­orful atmos­phere that pairs well with its craft beer.

Though new to owning a brewery, co-owners Jessy Bigelow, Zack Bigelow, and Joe Kesselring have been home­brewing together for years. Zack Bigelow and Kesselring’s first beer was “10 – 10-10,” brewed Oct. 10, 2010.

After that, Zack Bigelow and Kesselring brewed together every Sunday. And every year when the weather got warm they would brew lots of beer and have big summer beer parties.

Their friends and family enjoyed the beer, and the two got their first incli­nation to turn it into a bigger oper­ation when a neighbor asked if he could buy a case of the homebrew.

“No you can’t because that is boot­legging,” Zack Bigelow said.

But in 2014, they finally decided to approach the Michigan Brewers Pro­fes­sional Alliance for assis­tance and to see if it would be fea­sible to start a brewery of their own.

“We knew how to make the beer, we didn’t know every­thing else. And we wanted to succeed at it,” Zack Bigelow said.

The Brewers Pro­fes­sional Alliance, which only takes on five clients at a time, took Zack Bigelow and Kesselring on as clients. The two then began the process of getting funding and investment in order to open the brewery.

The Michigan Investing Locally Exemption Act which was approved in 2014, allowed Zack Bigelow and Kesselring to raise money through equity-based crowd­funding. Along with the crowd­funding, they sold 47% of the company to 19 local investors which made it pos­sible for them to open the brewery and make it a com­fortable place for the com­munity to relax.

“We wanted this to be a com­munity meeting place,” Zack Bigelow said.

Even in their keg dis­tri­b­ution to bars and restau­rants, they only dis­tribute within about a 30 minute radius because they want to keep every­thing com­munity-based.

“Another goal of ours is to make sure that one of the three of us is here at least a couple days a week at minimum so that we can get to know our cus­tomers,” Jessy Bigelow said.

Since the com­munity has invested in them, the owners have found ways to give back to the com­munity. With “Pints for a Purpose,” cus­tomers get to suggest a charity every month in the com­munity for partial pro­ceeds to go towards. Most recently, cus­tomers sug­gested Ram­shackle donate to Hillsdale County’s Court Appointed Special Advo­cates –– a network that trains and sup­ports citizen-vol­un­teers to advocate for the best interests of abused and neglected children in the courtroom and com­munity.

“We want to be the com­munity brewery. We got to stand by what we do. And if we can help somebody else, awesome,” Zack Bigelow said.

The brewery also has what they call “Beer it Forward,” where cus­tomers can prepay for another person’s beer. The prepaid beer can be for someone spe­cific or for a random cus­tomer.

The Bigelows and Kesselring are trying to create a com­fortable atmos­phere where cus­tomers are not daunted by craft beer.

“There is nothing worse when you go into a brewery and they make it so intim­i­dating,” Zack Bigelow said.

The Ram­shackle Brewing Company wants people of the com­munity to be able to relax and enjoy a beer at their venue.

“Nine times out of ten if someone is uncom­fortable they aren’t going to come back, no matter how good your beer is,” Kesselring said.

The brewspot is pet-friendly and allows cus­tomers to bring their own food and board games. Or if there is a wait at a restaurant nearby, cus­tomers can grab a beer at the Ram­shackle Brewery while they wait.

“And you won’t see a TV in here ever because con­ver­sation is what you need to have,” Zack Bigelow added.

Along with a com­fortable, com­munity-cen­tered atmos­phere, the Bigelows and Kesselring’s beers set them apart. For inspi­ration and recipes, these brewers look to the history books.

For example, the No. 1 seller is the “Push­mower,” a Ken­tucky common-style ale that was popular in the Ohio River Valley before it was for­gotten during the Pro­hi­bition.

“We kind of spe­cialize in reading a lot of history and seeing what they were drinking back then, because it wasn’t water, and we would start building a recipe based on location,” Zack Bigelow said.

And if cus­tomers are unsure what style of beer they want to try, there is the “beer wheel” for them spin and leave their decision to chance.

So far, the Ram­shackle Brewing Company has had almost a full house every night as the word gets out to locals and beer tourists.

The Bigelow’s and Kesselring are happy to see the enthu­siasm.

“We just want people to like craft beer,” Jessy Bigelow. 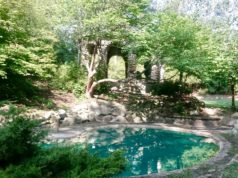